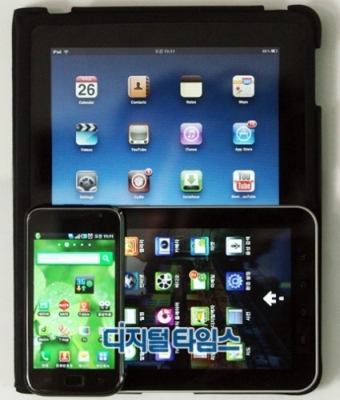 Just in case you weren’t sure, it turns out that the 7 inch Samsung Galaxy Tab (which won’t be officially unveiled for a few more days), is bigger than a 4 inch smartphone, but smaller than a 9.7 inch tablet like, say… the Apple iPad.

Korean site dt.co.kr has posted a hands-on video of the tablet, complete with a size comparison with a Samsung Galaxy S smartphone and an Apple iPad (albeit an iPad in a beefy looking case).

As expected, the tablet is running Android 2.2 and has a front-facing camera. The Korean model also has a digital TV tuner, something which I doubt we’ll see in the US version.
You can check out the Korean video after the break. I had a hard time getting it to load, but your results may vary.

2 replies on “Samsung Galaxy Tab: Bigger than a phone, smaller than an iPad”