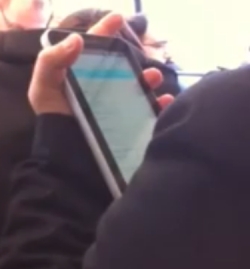 Samsung hasn’t exactly been doing a good job of keeping its upcoming 7 inch Android tablet under wraps. But the company hasn’t officially unveiled the device yet, despite a few early photos that were mistakenly shared with the world.

But the folks at Electronista spied a device that appears to be a Samsung Galaxy Tab in the wild on a train in Sydney Australia. The Samsung employee using the device couldn’t talk about the specs, but he seemed to enjoy using the tablet.

You can check out  a brief video of the encounter after the break.

If the rumor mill is correct, what we’re looking at is a machine with a 7 inch, 800 x 480 pixel touchscreen display, a 1GHz Hummingbird processor and 3G capabilities. It will likely run Google Android 2.2. It could also have 2 cameras.

There’s no official word on a release date in Australia, the US, or anywhere else… but with the IFA trade show coming up in a few weeks, I wouldn’t be surprised if an official announcement was on the way.