The Samsung Galaxy Tab A7 Lite is an affordable Android tablet with an 8.7 inch HD display, at least 3GB of RAM and 32GB of storage, and list prices starting at $160 (although it’s often on sale for considerably less).

Now AT&T has introduced a new variation of the tablet. The Samsung Galaxy Tab A7 Lite Kids Edition launches in the US on November 4th, 2022, and it will be available from AT&T for $7 per month. 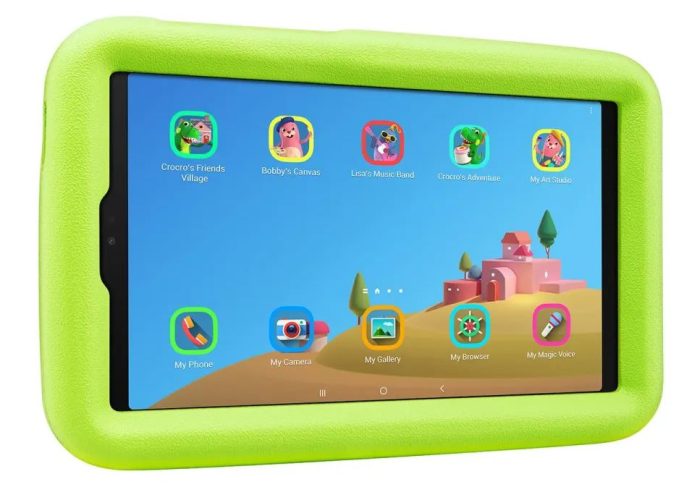 While that means you don’t need to spend a lot of money up front to get your hands on the tablet, AT&T spreads those payments out over 36 months, bringing the total to $252.

The Kids Edition also includes a rugged, shock-resistant bumper case with a built-in kickstand that can also be rotated and used as a carrying handle. And the tablet comes with the Samsung Kids app, which adds parental controls and kid-friendly games and apps.

But honestly you could probably build your own Samsung Kids app by just picking up the tablet at a lower price and then adding a sturdy case and enabling parental controls yourself. There are plenty of rugged options available in the $15 to $20 price range. And it looks like the official Samsung Galaxy Tab A7 Lite Kids cover is just a variation of the Anymode Kids case that Samsung sells in some parts of the world for its 10.4 inch Galaxy Tab A7 sells in other parts of the world (if you have one of those tablets, you can pick up an Anymode Kids Cover from eBay for $16).