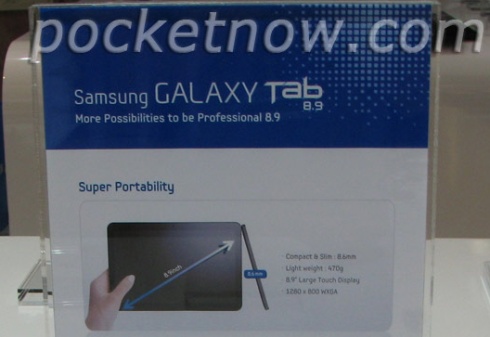 Samsung is expected to introduce an 8.9 inch tablet at a press event tomorrow. But the folks at PocketNow spotted some promotional materials for the upcoming tablet in advance of the event.

But aside from the fact that the 8.9 inch tablet will be a little smaller than the Galaxy Tab 10.1, it also looks like this will be one of the first tablets running Google Android 3.0 Honeycomb with a custom user interface on top. Most other Honeycomb tablets are running Android 3.0 pretty much the way Google designed it, without any extra bits of flare.

The Samsung UI features a home screen with widgets and application icons, much like the vanilla Android experience. But Samsung has developed its own custom widgets as well as an app switcher that provides live previews of apps that are running in the background.

The tablet will be one of the thinnest around, at 8.6mm (about 0.34 inches) thick. That makes the tablet a hair thinner than the Apple iPad 2.

The Samsung Galaxy Tab 8.9 will weigh just over a pound. And it will have a high resolution 1280 x 800 pixel display. The tablet has a 1 GHz dual core processor. There’s no word on which processor the Galaxy Tab 8.9 is using, but I wouldn’t be surprised at all if it had the same NVIDIA Tegra 2 chip that’s powering its big brother.

We should know more about the new tablet tomorrow.