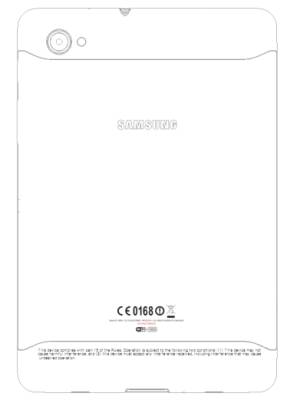 The Samsung Galaxy Tab 7.7 is an Android tablet with… you guessed it, a 7.7 inch display. But while many device makers are slapping 1024 x 600 pixel and lower resolution screens on anything with a screen smaller than 10 inches, Samsung is going all out with screen quality on this device. It’s expected to pack a 1280 x 800 pixel AMOLED display. It will also have a speedy 1.4 GHz dual core processor.

While it had been reported that Samsung had “no plans” to launch the tablet in the US, I’ve often found that no plans is just public relations-speak for “we just haven’t made any announcements yet.”

Sure enough, this week the Galaxy Tab 7.7 showed up at the FCC website. Any device with wireless capabilities has to pass through the Federal Communications Commission before it can be released in the United States. So while the FCC listing doesn’t guarantee a US launch, (companies sometimes submit documents and test results just in case they later decide to release a product), it’s a pretty good sign that Samsung is at least thinking about offering its latest tablet Stateside.

The tablet will be available with 16GB to 64GB of storage and front and rear facing cameras. It’s expected to run Google Android 3.2 Honeycomb with Samsung’s TouchWiz software interface at launch.

Some early benchmarks for the Galaxy Tab 7.7 have shown up at the GLBenchmark website, and it looks like the tablet is noticeably faster (at least at some graphics and video tasks) than anything with a 1 GHz NVIDIA Tegra 2 dual core processor, with frame-rates that are about twice as high as those notched by the Motorola XOOM in most tests. The Apple iPad 2 still trounces the Galaxy Tab 7.7 in most test though. 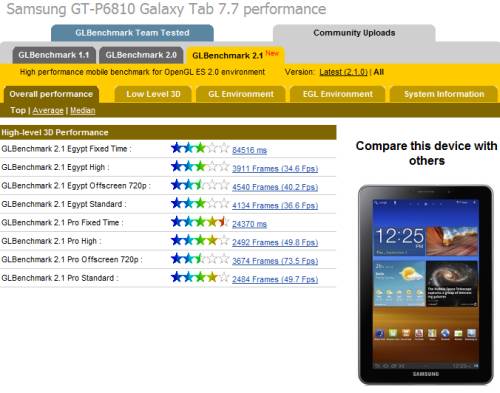 One reply on “Samsung Galaxy Tab 7.7 visits the FCC, gets benchmarked”