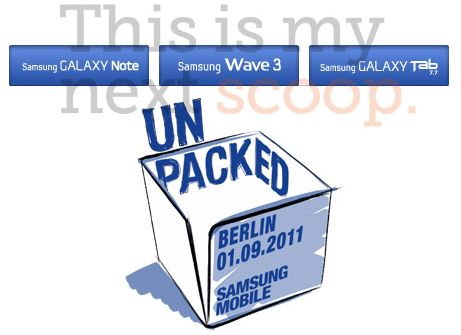 Samsung has all-but-confirmed that it will launch a new tablet called the Samsung Galaxy Tab 7.7 next week. The folks at The Verge received a tip that there are some files hidden away in Samsung’s Mobile Unpacked Android app featuring logos for upcoming devices including the Tab 7.7, a new Wave smartphone running Bada OS, and another product called the Samsung Note that we don’t know anything about.

The first Samsung Galaxy Tab Android tablet with a 7 inch display was released last year, but I received a tip recently that the company was planning a new 7 inch model with a higher resolution, 1280 x 720 pixel (or similar WXGA) display. My source had a slightly different name for the tablet, but it seems likely that the Galaxy Tab 7.7 will feature a 7.7 inch display.

Samsung plans to update the app on September 1st in advance of the IFA trade show in Berlin. Odds are we’ll have more details about the Galaxy Tab 7.7, Wave 3, and Note products then.