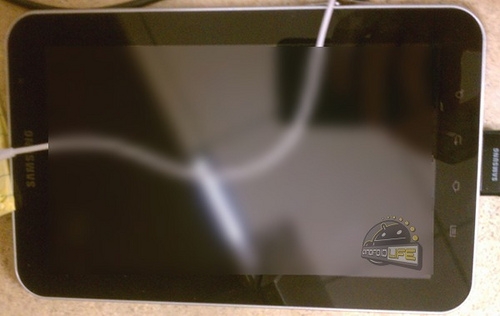 Brad previously mentioned that Samsung plans to unveil the Galaxy Tab 7.7 as a scaled-down addition to its Android tablet line-up some time soon, so it’s no surprise to see that the veil of secrecy has been briefly lifted this morning. A handful of blurry and not-too-revealing photos have been posted by An.droidlife.com.

The pictures do, however, reveal one surprising fact. If this is genuinely the Galaxy Tab 7.7, Samsung has chosen to include capacitive hardware buttons at the portrait-bottom edge of the frame. That’s curious since most Android 3.0 Honeycomb tablets have done away with those buttons, leaning instead on the OS’s built-in “taskbar.”

Does this mean the Galaxy Tab 7.7 is going to ship with Android 2.3.X Gingerbread? We’ll have to wait and see. But with the big reveal rumored for IFA 2011, we won’t have to wait all that long anyway. In addition to clarifying what OS is under the hood, we’ll also find out whether the Galaxy Tab 7.7 is sporting a 1.2GHz or 1.5GHz processor (which isn’t yet known, either).