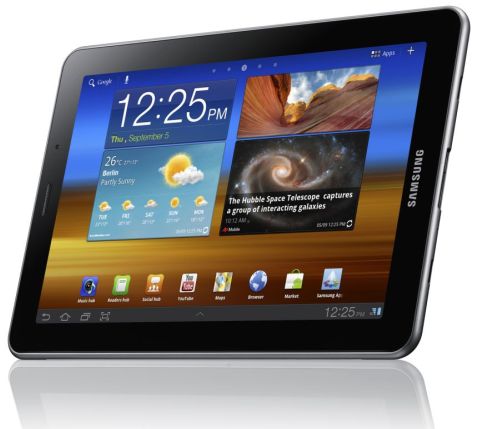 A few days ago Samsung introduced a new tabled called the Samsung Galaxy Tab 7.7 featuring Google Android, Samsung’s TouchWiz software interface, and a 7.7 inch 1280 x 800 pixel AMOLED display. It’s probably one of the most impressive devices unveiled at the IFA show in Berlin this week… but shortly after Samsung introduced the tablet, demo units disappeared from the Samsung booth, along with all photos and pictures of the tablet.

Now we know why. Bloomberg reports that a German court issued another preliminary injunction against Samsung thanks to a complaint from Apple.

Apple has been battling Samsung in European and Australian courts, saying that the Galaxy Tab line of tablets are little more than copies of Apple’s iPad. While the court hasn’t yet ruled in the case, it had previously granted a preliminary injuction barring Samsung from selling the Galaxy Tab 10.1 in Germany.

On the face of it, the Galaxy Tab 7.7 appears to be a very different device than the iPad. It has a smaller, higher resolution display, runs Google Android and TouchWiz instead of iOS, has a different processor, and a number of other differences. At the same time, it’s a portable device that surfs the internet, plays videos, and runs apps and the from the front the device looks like little more than a screen.

At this point Samsung isn’t actually trying to sell the Galaxy Tab 7.7 in Germany, and in fact the demo units on display bore labels proclaiming that they wouldn’t be available in Germany — but apparently that wasn’t good enough, because now the tablet isn’t even on display at once of the biggest consumer electronics trade shows of the year, because that show happens to be in Germany.

I suspect this will have little bearing on the launch of the tablet in other countries later this year.

5 replies on “Samsung Galaxy Tab 7.7 disappears from IFA thanks to German court order”