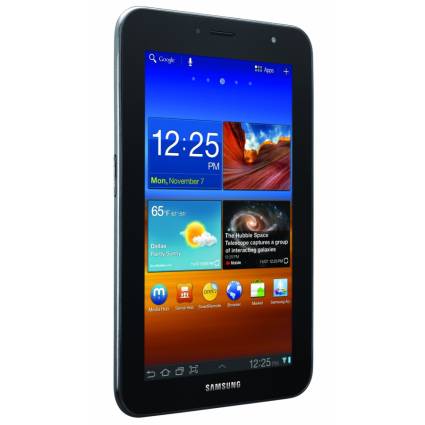 The Samsung Galaxy Tab 7.0 Plus is now available for purchase from Amazon for $399.99 and up

. The base price covers a 16GB model, while the 32GB version runs $499.99. No. I don’t know why companies feel they can charge that much money for 16GB of flash storage either.

Samsung’s latest tablet has a 7 inch, 1024 x 600 pixel display — just like the company’s first Android tablet. But the tablet is faster than last year’s model, comes with a remote control, and runs Google Android 3.2 Honeycomb.

While Samsung has been saying for a while that the Tab 7.0 Plus would have a 1.2 GHz dual core processor, now we know which chip it will have. AnandTech reports Samsung is using the same Exynos chip found int he Samsung Galaxy S II smartphone. That’s good news, as the Galaxy S II is one of the fastest Android devices on the market today.