Samsung recently introduced a new 5 inch smartphone and 8 inch Galaxy Note tablet. But it looks like the tablet may also be getting ready to refresh its 7 and 10 inch Android tablets.

Last month benchmark results started showing up for devices with model numbers suggesting they could be Galaxy Tab 3 tablets. Now we’re starting to see DLNA certification for tablets with the same model numbers. 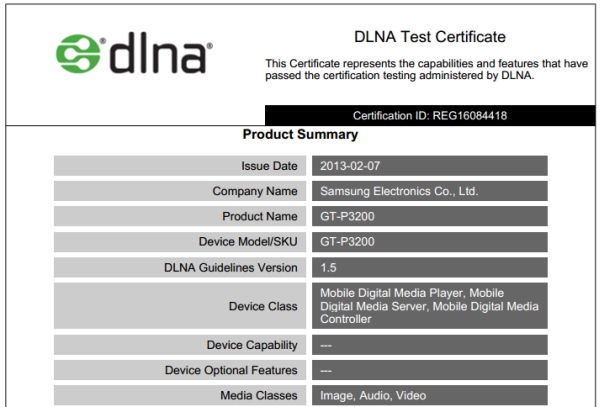 There appear to be WiFi-only, 3G, and 4G models of each, and the model numbers are similar to those Samsung currently uses for its Galaxy Tab 2 tablets.

Unfortunately, that’s about all we know about the devices at this point. There’s no official word on what kind of processors, screen resolutions, or other specs they’ll have.

If I had to guess, I’d say they’ll probably feature faster chips than the TI OMAP 4 dual-core processors Samsung used in its Galaxy Tab 2 tablets. But I wouldn’t hold my breath hoping for bleeding edge technology in these new tablets — Samsung seems to be saving the best for its Galaxy Note tablets.

In the past year or so, Samsung seems to have decided that the Galaxy Tab line will cover the company’s budget tablets. In fact, you can pick up a new Galaxy Tab 2 (7.0) for as little as $180, and refurbished models go for as low as $127.