Samsung recently launched the Smartphone GamePad, a wireless game controller designed to work with phones and small tablets. You can buy one, pair it with a phone, and sort of make your own NVIDIA Shield type gaming device. 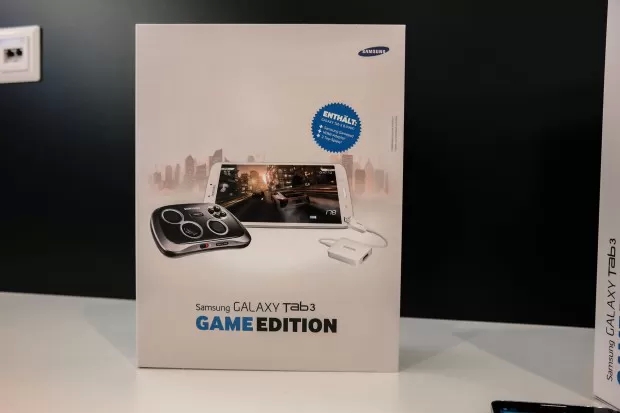 German site All About Samsung got an early look at the new Game Edition Bundle and reports it’s designed not just for gaming on the go, but also for connecting your tablet to a TV to play Android games on a larger screen.

The kit consists of a Galaxy Tab 8.0 WiFi, Samsung’s recently released GamePad, and an HDMI adapter.

Interestingly, Samsung says the GamePad is designed for phones and small tablets with 4 to 6.3 inch screens, so it’s not clear if you’ll actually be able to dock the 8 inch tablet while playing. But the controller connects to your phone or tablet via Bluetooth and NFC, so you can use the Samsung GamePad to control games whether you’re holding the tablet in your hands or not.

At launch about 35 games are expected to support the game controller.

The Galaxy Tab 3 8.0 features an 8 inch, 1280 x 800 pixel display, a 1.5 GHz dual-core processor, 1GB of RAM, and front and rear cameras. The tablet alone has a retail price of $250, but it’s not yet clear how much the Game Edition bundle will cost. It’s also not yet clear if it will be available world-wide, or just in select markets such as Germany.