Samsung is adding yet another new tablet — this one with a 7 inch display and Google Android 4.0 Ice Cream Sandwich software. You can add the Samsung Galaxy Tab 2 to the company’s long list of Android tablets, including the original Galaxy Tab, the Tab 10.1, Tab 8.9, and Tab 7.7. 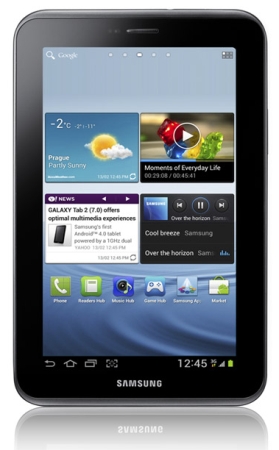 The new mode looks an awful lot like the Tab 7.0 Plus and has a similar 1024 x 600 pixel display, as well as a 1 GHz dual core processor, 1 GB of RAM, front and rear cameras, and support for WiFi, Blutooth, and HSPA+ wireless connectivity. It will be available with 8GB, 16GB, or 32GB of storage.

Samsung will also load the tablet with the latest version of its TouchWiz user interface as well as its own content stores for music, movies, and eBooks. There’s also a new “Samsung S Suggest” app recommendation feature.

The new tablet measures about 0.4 inches thick and weighs 0.76 pounds.

The Galaxy Tab 2 will launch in th UK in March. SammyHub reports the Tab 2 will cost around $420 and up in Scandinavian countries. There’s no word on when we’ll see this model in the US, how much it will cost, or why Samsung doesn’t just upgrade one of its many existing tablets with Android 4.0 instead of launching yet another model.

Update: Dutch site Tablets Magazine reports that the 16GB WiFi-only model will run 299 Euros, or a little under $400 US.