The Galaxy Tab may not have the high resolution display or quad-core processor you get from Google’s tablet, but unlike the Nexus 7 it has front and rear cameras and a microSD card slot. Now it looks like Samsung is preparing to launch a special student edition which throws in a few accessories without increasing the price. 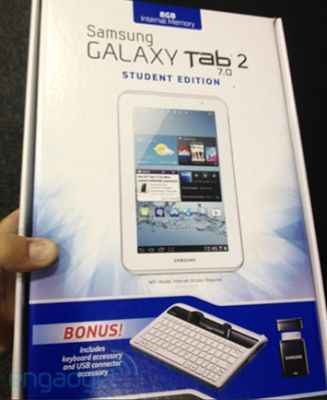 Engadget scored a picture of the Galaxy Tab 2 (7.0) Student Edition which is reportedly heading to Best Buy on or around August 19th. It’s pretty much the same tablet I reviewed recently, but with two bonus features:

If the dock is anything like the Samsung Galaxy Tab 10.1 dock I checked out last year (and certainly looks like the earlier dock), it’s not exactly Asus Transformer-style stuff. You probably can’t use the dock to charge the tablet battery, and it looks like the tablet only slots into the dock in one position — you can’t tilt the tablet forward or backward the way you would with a laptop screen.

On the other hand, the dock should make text entry a lot easier, allowing you to use the Android 4.0 tablet in some of the situations where you’d normally use a laptop. It should make emailing, instant messaging, or writing the great American novel a little simpler.

While it’d be nice to see Samsung drop the price of its 7 inch tablet to better compete with the Google Nexus 7, I suppose adding more features without increasing the price is the next best thing.