If you think the Samsung Galaxy Tab 10.1 tablet looks an awful lot like an Apple iPad, you’re not alone. A German court has prohibited Samsung from selling in the tablet in Germany after ruling that Samsung has infringed on Apple’s designs. The victory was a bit hollow, since it only affected Samsung’s German division… and didn’t prohibit retailers from ordering tablets from Samsung’s other units. But Samsung still decided not to take things sitting down.

Mobiflip noticed that Samsung has introduced a new version of the tablet in Germany which has a slightly different design. It’s called the Samsung Galaxy Tab 10.1N and the plastic bezel extends over the sides fo the tablet and onto the front. That’s about it for the differences.

From the front, the Galaxy Tab 10.1 looks like all black bezel and screen. The Tab 10.1N has a bit of chrome around the edges.

That might be all it takes to satisfy the courts. Apple doesn’t have exclusive design rights on devices with this type of bezel. 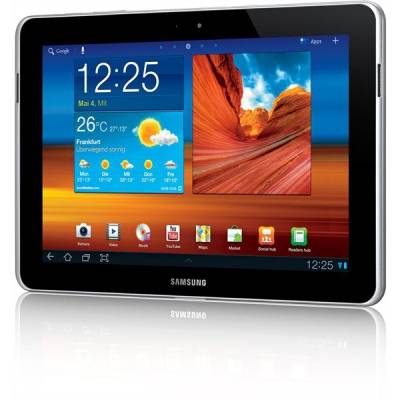 That doesn’t mean the lawsuits are definitely over. But it does mean that Germans can now order a version of Samsung’s 10 inch Android tablet. The model currently available in Germany has a 1 GHz NVIDIA Tegra 2 dual core processor, a 10.1 inch, 1280 x 800 pixel display, 16GB of storage, WiFi, Bluetooth, GPS, and 3G capabilities, and runs Google Android 3.2 Honeycomb.

The tablet is available from Cyberport for 549 Euros.