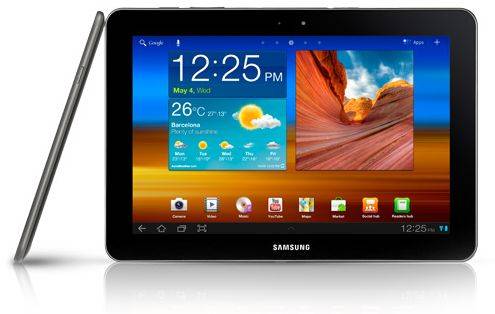 The Samsung Galaxy Tab 10.1 went on sale around the country this week — but only the WiFi model. If you’re holding out for a version with built-in 3G wireless capabilities you’re going to have to wait a little longer, but not too long. Wireless Goodness spotted an FCC listing for a version of the tablet with support for AT&T’s 3G mobile broadband network.

Samsung’s latest tablet has a 10.1 inch, 1280 x 800 pixel display, a 1 GHz NVIDIA Tegra 2 dual core processor and Google Android 3.1 operating system. It measures about a third of an inch thick and weighs 1.25 pounds, making it one of the thinnest and lightest tablets in its class.

Prices for the WiFi-only model start at $499, but the 3G model will likely cost a bit more. On the other hand, it’s possible that wireless carriers could subsidize the up-front cost for customers that sign up for a long term contract.

The Samsung Galaxy Tab 7 inch tablet which launched last year is still one of the only tablets that’s been made available from every major wireless carrier in the US. While this FCC listing shows an AT&T compatible model, it’s likely that Samsung is working with other carriers as well.