Samsung is expected to unveil its next flagship smartphone at Mobile World Congress next month, but a picture that allegedly shows the Samsung Galaxy S9 retail box spills the beans a bit early. 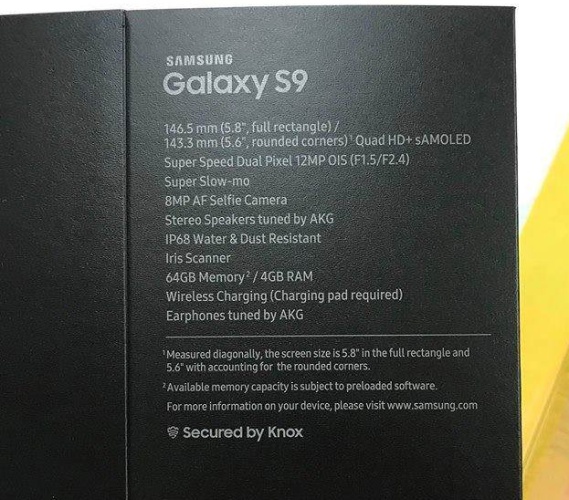 The camera is also said to have a variable aperture with f/1.5 and f/2.4 options.

The phone is also said to have an iris scanner, wireless charging support, an IP68 water and dust resistant case, and earphones that are also AKG tuned.

The Galaxy S9 allegedly has a 5.6 inch quad HD+ AMOLED display when you account for the screen’s rounded corners. It’s actually closer in size to a 5.8 inch display though, which is the diagonal measurement you would get if you ignored the rounded corners.

Keep in mind that this leaked photo may or may not be the real deal. Theer’s nothing in the specs that seems implausible, but we won’t know for sure how accurate these details are until Samsung officially unveils the Galaxy S9 next month.