Samsung is set to unveil the Galaxy S8 smartphone on March 29th, but a series of leaks has given us a pretty good idea of what to expect from the phone.

Now WinFuture has leaked some of the official accessories as well. Unsurprisingly, there will be a bunch of smartphone cases, including a few with unusual designs. Samsung will also offer an overpriced portable battery and a wireless charger that can li down flat or prop the phone up at an angle.

But the most interesting accessory is probably the DeX Station which we heard about last month. It’s basically a desktop dock that lets you use Samsung’s smartphone as if it were a PC.

The DeX Station basically looks like a smartphone dock/stand. But it’s much more than a charging station or an accessory for connecting a phone to a PC.

There’s an HDMI port which allows you to output video to a 4K display at 30 frames per second. There’s also a 10/100 Ethernet jack, two USB 2.0 ports, an embedded cooling system to keep the phone from overheating, and a power supply.

It’s not entirely clear what Samsung’s desktop experience looks like yet, but as one of the first companies to offer Android phones with multi-window features, it’s likely that Samsung has figured out a way to make Android look at least a little bit like a desktop operating system when the Galaxy S8 is connected to an external display. Samsung isn’t the only company working to make Android phones into desktop-style devices either.

The DeX Station has a list price of about 150 Euros, although WinFuture notes some retailers are likely to sell it for less. 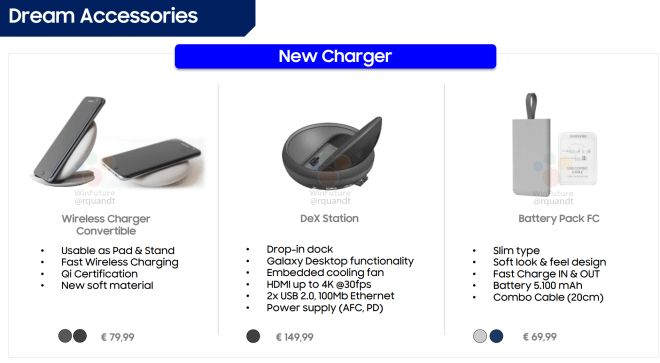 Other accessories include the aforementioned Qi wireless charger (80 Euros), slim 5,100 mAh faster charging external battery (70 Euros), and a wide range of screen protectors and cases, including:

All of the pricing details reported by WinFuture come from European documents. Perhaps we’ll learn the US pricing when Samsung officially announces all of these products next week. 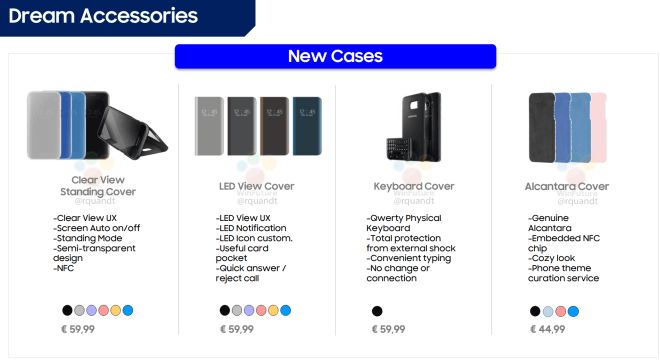