Samsung’s 2022 flagship phone lineup marks the official merging of the Galaxy S and Galaxy Note line of devices thanks to the new Samsung Galaxy S22 Ultra which earns it ultra in just about every conceivable way.

It’s a phone with a big, high-res display, support for plenty of memory and storage, an impressive set of cameras, a big battery and fast charging support, and not only does the Galaxy S22 Ultra support pressure-sensitive input with a Samsung S-Pen, but it also has a garage that lets you store the pen inside the phone when you’re not using it. But the Galaxy S22 Ultra has a big price tag to go along with its big specs: it sells for $1200 and up. Fortunately Samsung also has new Galaxy S22 and Galaxy S22+ models for folks looking for something a little more affordable. 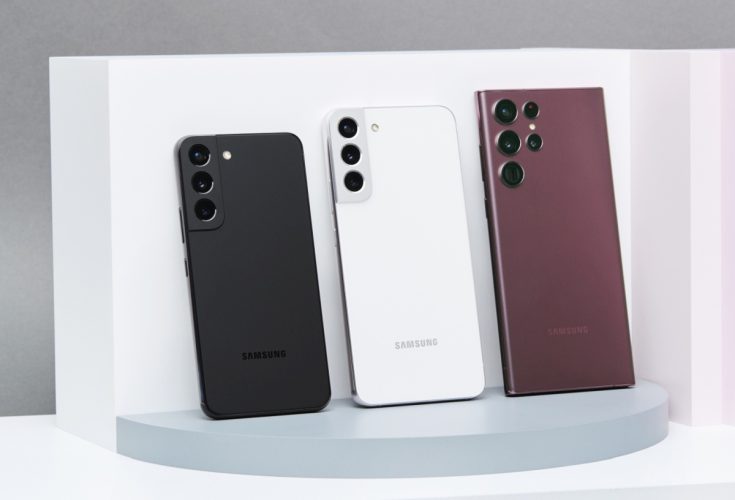 All of the new phones feature 120 Hz AMOLED displays, Qualcomm Snapdragon 8 Gen 1 or Samsung Exynos 2200 processors (depending on the region where you buy the phone), LPDDR5 memory, UFS 3.1 storage, and support for shooting 4K/60Hz video with their front or rear cameras (you can also record 8K video at 24 fps with the rear cameras).

But the Galaxy S22 has a smaller screen and battery, slower fast charging, and an $800 starting price, while the $1000 Galaxy S22+ has a screen that’s almost as big as the S22 Ultra’s, but at a lower resolution. Both phones also lack S-Pen support and only support up to 8GB of RAM and 256GB of storage (while the S22 Ultra tops out at 12GB and 1TB, respectively).

Here’s an overview of key specs for each of Samsung’s new S22 series phones: