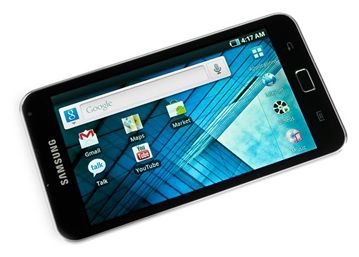 First unveiled in February, some folks looking for a good Android equivalent of an Apple iPod touch have been waiting impatiently for the Galaxy S WiFi 5.0 to go on sale in the US… and today it has. But it’s available from an unusual source: Woot.

Woot is selling the mini-tablet for $169.99 + $5 shipping today only. Woot is best known for offering deep discounts on items that have already been on sale from other stores for a little while, in one-day-only sales. This is the first time I can think of that Woot actually offered a product before it was available anywhere else.

That said, $170 is a great price for this little device. It supports the Google Android Market, has a built-in mic and speaker, support for Bluetooth 3.0, 802.11b/g/n WiFi, and FM Radio, and has a VGA front-facing camera and a 3.2MP rear camera with auto-focus and flash.

Hopefully today’s sale at Woot means that we’ll start seeing the device from other retailers soon — even if it costs a few bucks more. But it’s possible that Woot (which is owned by Amazon) scored some sort of exclusive — or got some units from overseas.

Unfortunately while these portable media players run Google Android and feature similar sizes and shapes to the Samsung Galaxy S WiFi 5.0, many of these devices are hampered by slow processors, low quality displays, or the inability to access the official Google Android Market to download apps.

At $170, the Samsung Galaxy S WiFi 5.0 may not be the cheapest Android powered PMP, but it’s probably one of the highest quality devices you’ll find for that price.

If you’re looking for something a little bigger, sellout.woot.com is also offering the ViewSonic gTablet 10.1″ tablet with a 1024 x 600 pixel display and NVIDIA Tegra 2 dual core processor today for $239.99+ $5 shipping.