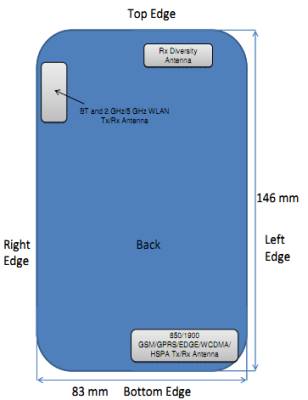 The Samsung Galaxy Note is an Android device with a 5.3 inch, 1280 x 800 pixel display, a capacitive touch panel, and an active digitizer that allows you to take notes or make drawings with a digital pen. The little guy also features a 1.4 GHz dual core processor, 1GB of RAM, an 8MP rear camera and 2MP front-facing camera, and weighs just 6 ounces.

Despite reports that the Galaxy Note might not make it to the US, this week it showed up at the FCC website. If you’re having a hard time figuring out whether to call the device a phone or a tablet, it looks like Samsung is referring to it as a “portable handset” in the FCC documents. So I guess it’s a phone.

Pahndroid also notes that the Galaxy Note appears to be designed to work with the 3G and 4G wireless networks operated by AT&T, so it looks like it may be available from that carrier soon. That doesn’t mean Samsung isn’t also shopping the Galaxy Note around to other carriers. Few device makers do as good a job as Samsung of making their phones and tablets are available from multiple major carriers.

There’s no word on the price or release date — and it’s still possible that the phone/tablet will never launch in the States. Sometimes companies pass devices through the FCC just to gain approval in case they later decide to launch a product.

2 replies on “Samsung Galaxy Note passes through the FCC, heading to AT&T?”