Samsung has been blurring the lines between smartphones and tablets with its Galaxy Note line of devices since 2011. The phones feature large screens and get their names from the included digital pen which lets you write and draw on the screen.

The newest model is the thinnest and lightest to date, but the Samsung Galaxy Note 3 also has the largest display and longer battery life than its predecessors. 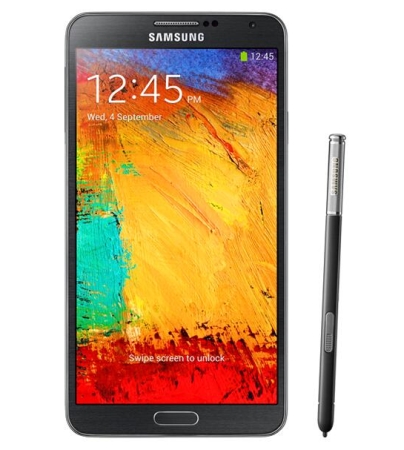 Samsung says the new model also offers true multitasking with the ability to run multiple apps on the screen at the same time, and offers enhanced S Pen capabilities.

You can shoot 4K videos, or 1080p video at 60 frames per second, and Samsung has improved low-light performance. The company has also added support for 24-bit, 192 KHz audio.

It supports 802.11a/b/g/n/ac WiFi, Bluetooth, NFC, and GPS. It also has an IR port which lets you use the phone as a remote control for your TV.

Samsung has offered the ability to run multiple apps side-by-side on Galaxy Note devices for a while, but now the company also lets you run the same app in two windows. For instance, you can have two instant messaging apps on the screen at the same time, which means you can chat with two people at once — and even drag and drop content from one window to the other. 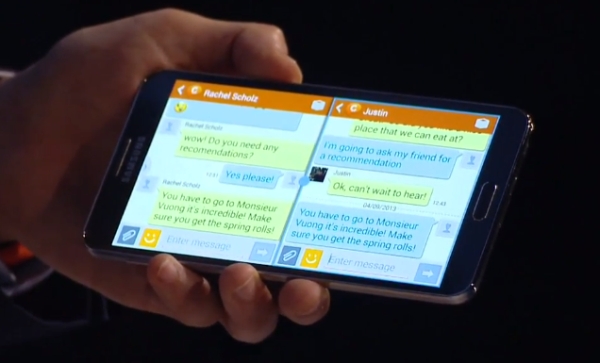 The company is also promising better support for 4G LTE networks thanks to Category 4 LTE with support for multiple bands.

The Galaxy Note 3 will ship with Android 4.3 Jelly Bean, and it launches September 25th in 149 countries. It has a faux-leather finish on the back, which will be available in black, white, or pink.