Samsung has announced that 5 US wireless carriers will offer the Galaxy Note 2 smartphone starting in mid-November. Pricing will vary by carrier.

The Galaxy Note 2 is a smartphone with a 5.5 inch Super AMOLED display, a 1.6 GHz Samsung Exynos quad-core processor, 2GB of RAM, and 16GB of storage. It’s also got the largest screen you’ll find on pretty much any smartphone around, although it’s still smaller than most tablets. 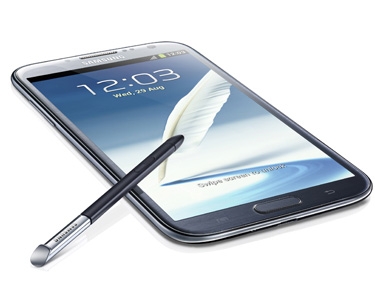 The other thing that sets Samsung’s “Note” series apart from most Android phones and tablets is the S Pen. This is a pressure-sensitive digital pen that Samsung includes with the device, letting you write or draw on the screen. You can also use your fingers to operate the phone, just like you would on most modern smartphones.

The Galaxy Note II will be the first Samsung smartphone to ship with Google Android 4.1 Jelly BEan software.

It has a 3100mAh battery, a microSD card slot for extra storage, and the phone supports HSPA+ and 4G LTE networks.

AT&T, Sprint, T-Mobile, Verizon, and US Cellular will all carry the Galaxy Note II.