Samsung is holding an event in New York City on August 9th , where the company is expected to unveil the Samsung Galaxy Note 9 smartphone and the new Samsung Galaxy Watch.

But, as usual, the company seems to be having a hard time keeping a lid on details until then.

Android Headlines has just posted three pictures that it claims show what the Galaxy Note 9 will look like in black, blue, and brown color options. MySmartPrice has a closer look at the blue model. And Samsung actually posted a picture of the upcoming Samsung Galaxy Watch on its own website briefly before removing the image. 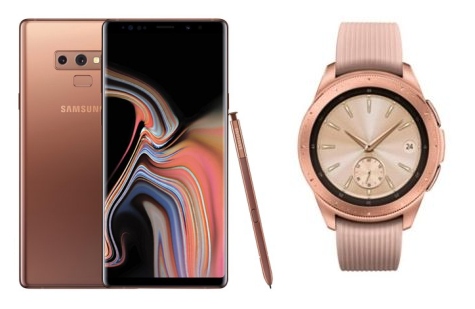 Unsurprisingly, the Galaxy Note 9 images show a phone with slim top and bottom bezels, a curved display that results in virtually no side bezels at all, a fingerprint sensor on the back of the phone, and dual rear cameras. Oh, and of course they’re a stylus — the pen is the main thing that sets the Galaxy Note line of smartphones apart from the Galaxy S series.

And if you believe a recent unboxing video, the phone will also have 12MP + 12MP dual rear cameras, an 8MP front camera, AKG-tuned earbuds, 6GB of RAM, and 64GB of storage.

The company’s new watch, meanwhile, is expected to be the first to to ship without the word “Gear” in its name. Despite earlier rumors, it’s probably going to run Samsung’s Tizen Linux-based software rather than Android Wear. And according to the leaked images, at least one model will come in a rose gold color and feature a metal wrist strap.