Samsung has taken the wraps off its latest poorly-kept secret: the Samsung Galaxy Note 8.0. As the name suggests, it’s a tablet with an 8 inch display and a digital pen that lets you write notes or draw on the screen. But it also has one of Samsung’s fastest processors, and the international version of the Note 8.0 will also make phone calls.

So if you thought the company’s 5.5 inch Galaxy Note phones weren’t awkward enough to hold up to your head while making a call, maybe an 8 inch phone is what you need (I suspect you’ll get less funny looks if you use a headset to make calls). 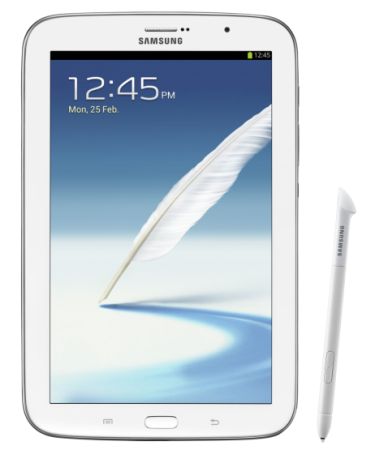 The Galaxy Note 8.0 is powered by a 1.6 GHz Samsung Exynos 4 quad-core ARM Cortex-A9 processor and 2GB of RAM. It supports up to 32GB of storage and has a 4600mAh battery. There’s also a microSD card slot for additional storage.

The 12 ounce tablet has a 1280 x 800 pixel TFT display, WiFi and Bluetooth, and the international version supports HSPA+ and GPS.

Samsung will ship the Galaxy Note 8.0 with Android 4.1.2 Jelly Bean and the company’s TouchWiz user interface and S Pen software for note-taking.

On the back of the tablet there’s a 5MP camera. The front features a 1.3MP camera. The tablet also features an IR port and software that lets you use the Galaxy Note 8.0 as a universal remote control.