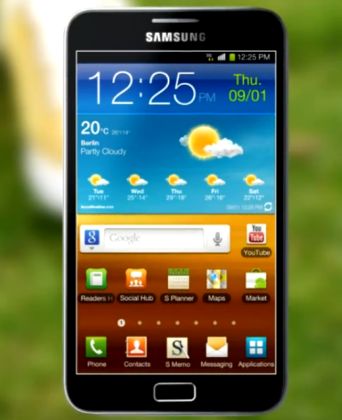 The Samsung Galaxy Note is a new Android device with a 5.3 inch display. It seems big for a phone, but not that big. After all, phones with 4.3 and 4.5 inch displays are starting to seem normal. And it seems small for a tablet, but not that small. After all, Samsung and other manufacturers have been putting out 7 inch devices for years.

But here’s the thing: despite the small display, the Samsung Galaxy Note has the same screen resolution as the Galaxy Tab 7.7 or Galaxy Tab 10.1. The pixels are just packed more densely, which means that 1280 x 800 pixel Super AMOLED display on the Galaxy Note has a 285ppi screen that will probably be one of the most impressive screens available on handheld Android device.

There’s another thing that sets this device apart from the crowded field of Android tablets and smartphones though. It has a digitizer and stylus, allowing you to take handwritten notes, draw pictures, and perform special gestures such as double-tapping to take a screenshot.

Samsung includes a Memo app which you can use to draw or write notes (or type, snap a photo or record voice notes). The company also plans to launch an SDK to let third party developers create apps that make use of the stylus.

Android doesn’t include support for a stylus/digital pen out of the box, but Samsung isn’t alone in creating a tablet that’s meant to be used with one. The HTC Flyer 7 inch Android tablet also offers an optional digital pen and custom software designed to work with the pen. But at this point I’m not sure it makes a lot of sense for developers to write apps that can only work on the HTC Flyer or only on the Galaxy Note. It would be nice if there was a single SDK that could support all devices with digitizers and pens.

The Samsung Galaxy Note has a 1.4 GHz dual core processor, 1GB of RAM, and runs Google Android 2.3 Gingerbread. It has an 8MP rear-facing camera and a 2MP front camera. The device has a 2500mAh battery and measures less than 0.4 inches thick, and weighs just about 6 ounces.

There’s no word on how much the Galaxy Note will cost or what carriers will offer the device, but it will come in LTE and HSPA+ versions.