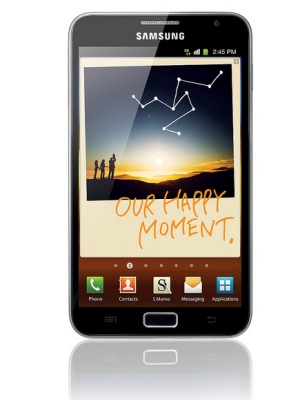 Samsung has announced that the Galaxy Note is headed to the US in 2012. The Note is an Android device that’s a bit of a cross between a phone and a tablet. It can make phone calls, but it has a relatively large 5.3 inch display and also comes with a digital pen for writing or drawing on the display.

Samsung has already shipped a million Galaxy Notes in Europe and Asia. It’s not clear how many customers have actually bought the device, but it’s a safe bet that Samsung wouldn’t be introducing the Note in the States if it wasn’t doing well in other markets.

The Galaxy Note has a 1280 x 800 pixel Super AMOLED display with 285 pixels per inch. It has a 1.4 GHz dual core processor, 1GB of RAM, and Android 2.3 Gingerbread operating system with Samsung’s TouchWiz software running on top, as well as custom software called S Pen which is designed to work with the stylus.