Samsung’s new 10 inch tablet with support for finger and pen input is coming to the US tomorrow for $499 and up.

Update: Check out our hands-on with the Galaxy Note 10.1 for more details! 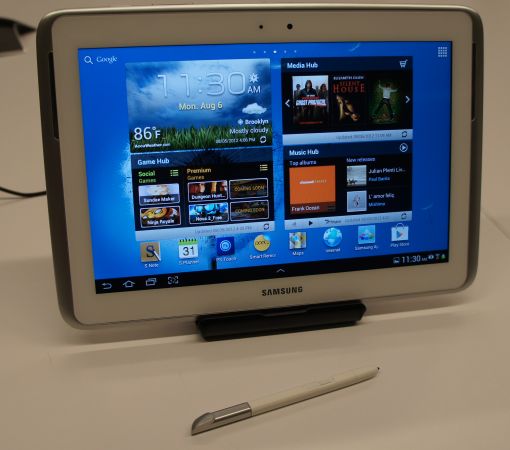 It features two front-facing speakers, and an IR port which lets you use the tablet as a universal TV remote control.

Samsung is shipping the Galaxy Note 10.1 with Android 4.0 Ice Cream Sandwich, but the company plans to release an Android 4.1 Jelly Bean update by the end of the year.

The price is pretty close to what we expected based on some retail listings that went up (and were taken down) a little prematurely.

The tablet should be available in the US starting August 16th, 2012. It will be available in either white or grey. The Best Buy Store in New York City’s Union Square is already selling the tablet today.

At $499, the Galaxy Note 10.1 isn’t exactly the cheapest tablet around. But it’s no more expensive than the newest iPad — and while the iPad has a higher resolution screen, Samsung’s new tablet has more memory and support for pressure-sensitive pen input, if writing and drawing are important to you.

On the other hand, like the iPad, Samsung’s tablet doesn’t have standard USB or HDMI ports. Instead there’s a proprietary docking port for connecting a computer, charging the device, or hooking up other accessories — including USB devices or HDMI cables.

The tablet does feature a microSD card slot for up to 64GB of additional storage space.