Samsung revealed the Galaxy Note 10.1 Android tablet back at Mobile World Congress in Barcelona last February, but since then the company has been pretty quiet about the device.

Samsung hasn’t revealed all of the device’s specs yet, though they did confirm that it will have a quad-core processor, 1GB of RAM and a 5MP rear-facing camera. The last time we heard, it was set to run Android 4.0 And, of course, it sports an active digitizer stylus alongside capacitive touch, just like the Galaxy Note smartphone. 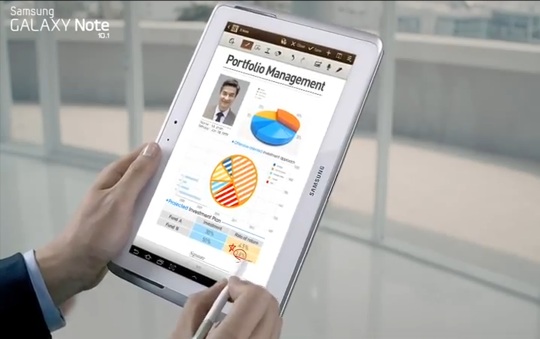 Even though the final details, price and on sale date haven’t been announced, the Note 10.1 already has a 30-second TV ad. The commercial below doesn’t reveal any new details but does highlight the features that will make the Note stand apart from most other tablets.

Beyond the S-Pen there’s the “multi screen” view that allows for two apps to sit side-by-side on the display just like a normal computer, Shape Match for cleaning up hand-drawn elements in presentations, and drag-and-drop from one app to another.

This particular ad is aimed at business people, though I suspect it won’t be long before we see the consumer side of the Note. Still, it will be interesting to see how this tablet fares against the Lenovo ThinkPad Tablet (or its successor, if there is one).

The commercial doesn’t give up the release date or the price, though indications are that the 16GB version will cost $499 and the 32GB version will run for $550. Still, Note fans probably don’t have long to wait for the final reveal. Samsung sent out “Save The Date” notices last week for an August 15th Galaxy event. It’s a good bet that the Note 10.1 will be the star of that show.

Source All About Samsung via The Verge

2 replies on “Samsung Galaxy Note 10.1 Gets A Commercial Before It Gets A Release Date”