Both stores are offering promotions form now through the end of the month – you can get up to a $150 gift card when you buy one of the new laptops from Best Buy, or up to $100 in credit for accessories or future purchases when you purchase from Samsung’s store.

The Galaxy Book Flex2 α is the most affordable of the bunch, with a starting price of $850. It’s a 2.6 pound convertible notebook with a 13.3 inch QLED display, a body that measures 0.55 inches thick, and specs that include an Intel Tiger Lake processor, WiFi 6 and Bluetooth 5.1 support, HDMI, USB-C, and USB-A ports, and a full HD touchscreen display.

With prices starting at $1000, the Galaxy Book Pro is available with a choice of 13.3 inch or 15.6 inch AMOLED displays, with the smaller model featuring an even more compact design than the Galaxy Book Flex2 α, at 0.46 inches thick and just 1.92 pounds.

This laptop also features a Thunderbolt 4 port, which the cheaper model lacks. And it has a larger battery for longer battery life. But the Galaxy Book Pro does not have a touchscreen display.

If you want that feature though, there’s always the Galaxy Book Pro 360 which has not only a touchscreen display, but also a 360-degree hinge that lets you push the screen back to use the computer like a tablet. It also supports a Samsung S-Pen for pressure-sensitive input. 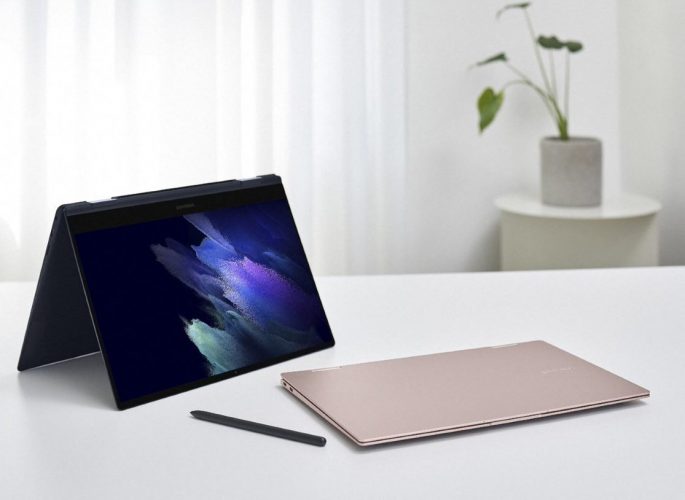 One oddity though? The convertible tablet-style notebook is the only one that has no USB-A ports. Instead it has three USB-C ports, including one with Thunderbolt 4 functionality.

The 13.3 inch Samsung Galaxy Book Pro 360 also has the loudest speakers of the bunch, with stereo 4W speakers. The notebook weighs 2.29 pounds and measures 0.45 inches thick, while its 15.5 inch counterpart is a 3.06 pound notebook with body that measures 0.47 inches thick.