Samsung’s new Galaxy Book Pro 360 5G is a 2.43 pound notebook with a 13.3 inch AMOLED touchscreen display, a 360-degree hinge, a Samsung S-Pen for pressure-sensitive input, and, as the name suggests, support for 5G cellular networks.

Powered by an Intel Tiger Lake processor, the notebook also has a Thunderbolt 4 port, stereo 4 watt speakers, and a 63 Wh battery, which is larger than you typically find in a notebook this light. The Galaxy Book Pro 360 5G should be available starting November 11 for $1400 and up. 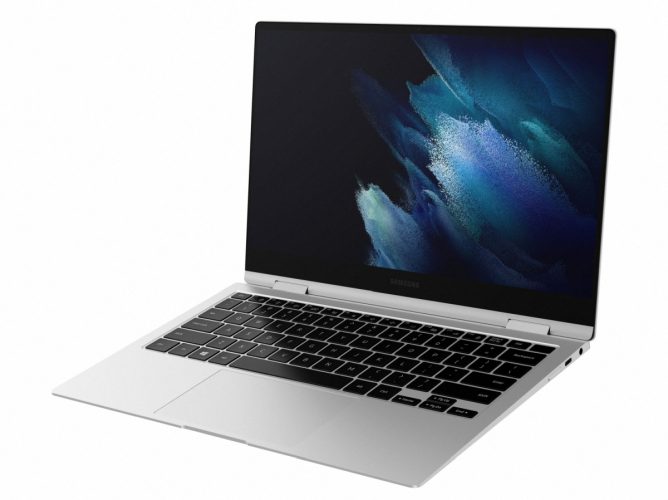 While the starting price seems a little high for a notebook that will ship with an Intel Core i5-1130G7 processor, 8GB of RAM and 256GB of storage, it’s not like there are a lot of cheaper options in the 5G-ready thin and light space.

Folks willing to splurge for better specs will also be able to pick up a model with up to an Intel Core i7-1160G7 processor, 16GB of RAM, and 512GB of storage.

Both models have aluminum bodies that measures 11.91″ x 7.95″ x 0.45″ and both feature support for WiFi 6E as well as 5G sub-6 GHz network bands. Ports include one Thunderbolt 4 port, two USB Type-C ports, a headset jack, and a microSD card reader.

The notebook has a 720p webcam and dual array microphones, and it ships with Windows 11.

If you don’t need 5G, Samsung also launched a WiFi-only version of the Galaxy Book Pro 360 earlier this year. That model weighs just 2.29 pounds and comes with more powerful Core i-51135G7 or Core i7-1165G7 processor options and has a starting price of $1000.