Samsung has been selling smartphones with foldable OLED displays for a few years. Now the company may be preparing to launch a laptop that uses similar technology.

According to @UniverseIce, a Samsung Galaxy Book Fold 17 is in the works. And if you want an idea of what it would could look like, Samsung has you covered – the company released a concept video earlier this year envisioning how some of its foldable and rollable displays could be used in upcoming products… like laptop/tablet hybrids. 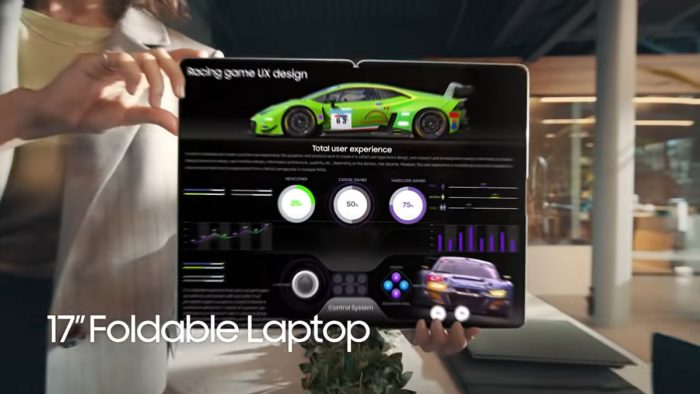 Part of the video focuses on a 17″ Foldable Laptop which basically looks like a large-screen tablet that can fold in half to be used like a laptop… assuming you’re cool with a laptop that has no built-in physical keyboard (although it’s possible that a keyboard add-on could be placed atop a portion of the screen for typing). 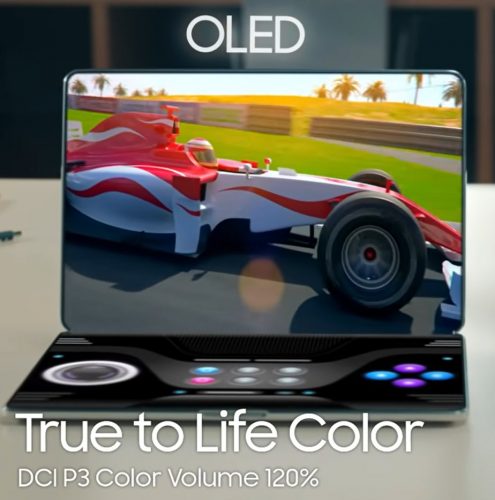 If the idea seems familiar, that’s because Samsung wouldn’t be the first company to bring a device like this to market. Last year Lenovo launched the ThinkPad X1 Fold, which is a hybrid device with a 13.3 inch foldable display that can be used in laptop or tablet modes.

Early reviews of Lenovo’s device weren’t all that great, largely due to software problems. Samsung has plenty of experience making software for foldables, which could give the company an advantage in this space – but there’s a lot we don’t yet know about the Galaxy Book Fold 17.

There’s no information about its processor, for example. It could be a high-performance device with a powerful AMD Ryzen or Intel Alder Lake processor. Or it could be a low-power machine with an ARM or energy-efficient Intel CPU. And we don’t even know the operating system. This could be a Windows computer, but for all we know it’s a Chromebook or even an Android device. After all, most of Samsung’s foldable to date have run Android, which means that the company has already developed software solutions for foldables running Google’s mobile OS.

It’s also possible that the Galaxy Book Fold 17 will never actually see the light of day. But @UniverseIce has a pretty good track record with leaks, particularly when it comes to Samsung products.

While Samsung hasn’t officially confirmed the existence of the Galaxy Book Fold 17, the company did publish another video of a large foldable OLED display this week.

This time the goal was to showcase the durability of Samsung’s display technology, with the video showing a real screen (rather than a concept) being folded and unfolded repeatedly. According to Samsung, the screen can be folded more than 30 thousand times even in cold environments.