Samsung has been selling smartphones with foldable OLED displays since 2019, but so far the company has basically stuck with phones that fold in half either vertically or horizontally. But now the company is showing off prototypes of devices that use flexible display technology in different ways. 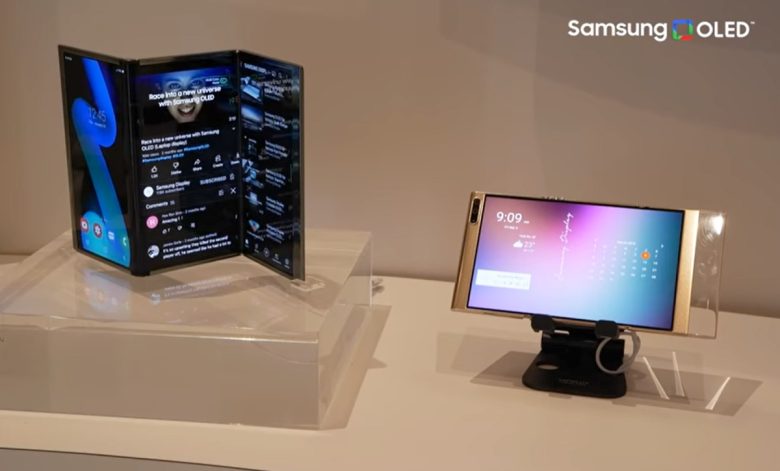 These displays are both designed to fold at two points rather than one, effectively breaking the screen up into three parts. When unfolded you have a wide-screen tablet. Folded up, you have a pocket-sized device.

Samsung’s Flex S is designed to fold… like the letter S, with an accordion-like design where you fold one edge so that it covers a portion of the screen, leaving just one third still visible. Then you can fold that backward and hold the device like a phone with a single screen exposed.

Flex G, meanwhile, is a screen where both edges fold inward, resulting in a smaller, pocketable device with the entire display covered and protected (although I suppose this sort of design could also work with a secondary cover display that you could use when the main screen is folded.

The Flex Slideable display is more of a rollable screen than a foldable. A portion of the screen is hidden behind the primary section and slides out when you want the extra screen space.

There’s no word on if or when Samsung’s Flex Slideable will become a real thing you can buy, but Samsung’s demo does hint at the technology being used for more than just a bit of screen space. For example, it could allow you to access an app launcher or shortcut keys when extended, without losing your view of the app that was already on your screen.

This 17 inch flexible OLED display folds in half, making it possible to use it as a large-screen tablet or a 13 inch laptop, where the bottom portion is used for a virtual keyboard or other application controls.

You should also be able to hold it in the center with a slight fold inward to use the display like a book.

And if that sounds familiar, that’s because this concept is strikingly similar to the Asus Zenbook 17 Fold that was announced this week, and which is supposed to come to market in the second quarter of 2022.

via SamMobile and MySmartPrice