Samsung’s upcoming Galaxy S IV smartphone is expected to start shipping in April, and some models will feature the company’s new 8-core Exynos 5 Octa processor. So it’s not exactly shocking that the company has announced that mass production of the new chip is scheduled to start in the second quarter of 2013.

But it’s not just Samsung phones and tablets that use the company’s chips… so we could eventually see these powerful octa-core chips in products from other device makers as well. 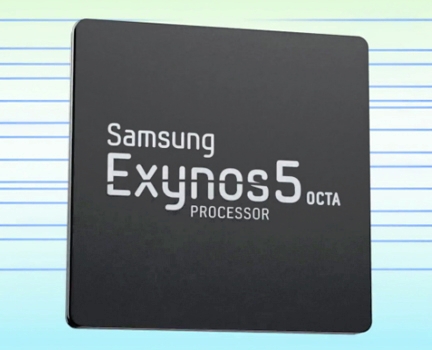 Samsung says this allows the chip to use as much as 70 percent less power than one which only features ARM Cortex-A15 processor cores.

The chipset can handle devices with displays up to 2560 x 1600 pixels, USB 3.0 interfaces, full HD video playback at 60 frames per second, and 13 megapixel cameras.

I’m not aware of any products other than the Samsung Galaxy S IV which are expected to use the Exynos 5 Octa just yet… but now that production is ready to start I suspect it won’t be long.

3 replies on “Samsung Exynos 5 Octa goes into production, not just for the Galaxy S IV”