Here’s the idea: keep a docking station plugged into your monitor and when you drop the phone into the cradle you’ll be able to see all of your Android apps on the external display in a desktop-style environment. 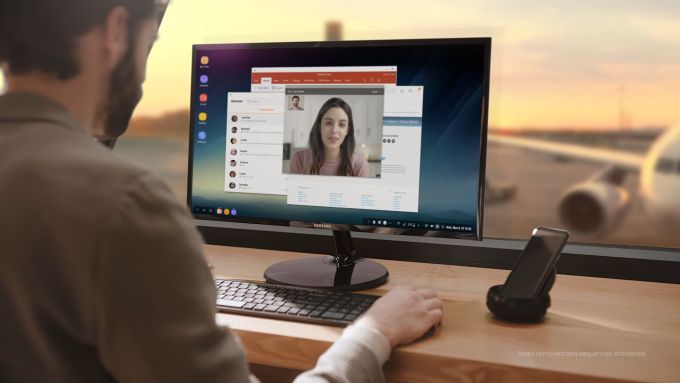 The DeX system lets you connect a keyboard and mouse, run apps in windows that can be resized and moved around the screen, and drag and drop items between apps.

In a brief demo during today’s Galaxy S8 and Galaxy S8+ launch event, Samsung showed how you can use Microsoft’s Office apps for Android, for instance, to edit a PowerPoint presentation and then drag and drop it into an email.

The dock has an Ethernet jack, two USB ports, and HDMI output, allowing you to easily use a wired internet connection or connect to accessories including a mouse, keyboard, hard drive, or game controller. Or you can use Bluetooth to connect to most of those things.

There’s a USB Type-C port on the dock for power: your phone charges while it’s acting like a PC.

You can also use some of the phone’s hardware while it’s connected to an external screen: for instance, the iris scanner will let you login with a glance, whether the phone is docked or not.

Samsung isn’t the only company with software designed to make Android look and feel like a desktop operating system. But it is poised to be the first to bring that software to market on a smartphone… something Jide plans to do in the future, but which that Chinese startup is still working on.

Now that we’re about to be able to use our phones for desktop-like experiences, I guess we’ll find out if there’s enough demand for actually doing that to justify the amount of work that companies seem to be throwing into the feature.

It’s definitely a cool concept… but I have to wonder: if you’ve already got a monitor, keyboard, and mouse lying around, aren’t they already probably plugged into a PC that’s more powerful and versatile than your phone?

DeX (and Remix Singularity) might have a more niche use though: business travelers who are looking for a single-purpose device that’s smaller than a laptop. That’s a market that Microsoft already seems to be targeting with its Windows 10 Continuum for Phone feature which is available in devices like the Lumia 950 and HP Elite x2.

While there are some programs that neither Windows 10 Mobile nor Android can handle, both operating systems have a similar workaround: software that lets you login to a full Windows desktop in the cloud (or running on a remote PC), essentially turning your phone into a remote control for a Windows environment.

Update: The DeX dock is up for pre-order for $150 and should ship in “late April,”  when the Galaxy S8 is released.