Samsung has been working with AMD to bring Radeon graphics to the Exynos chips used in many of the company’s smartphones and tablets, and while Samsung has been pretty quiet about the partnership for the past few years, this June AMD CEO Lisa Su promised that the “next flagship” SoC from Samsung would feature AMD RDNA 2 graphics with support for features like ray tracing. 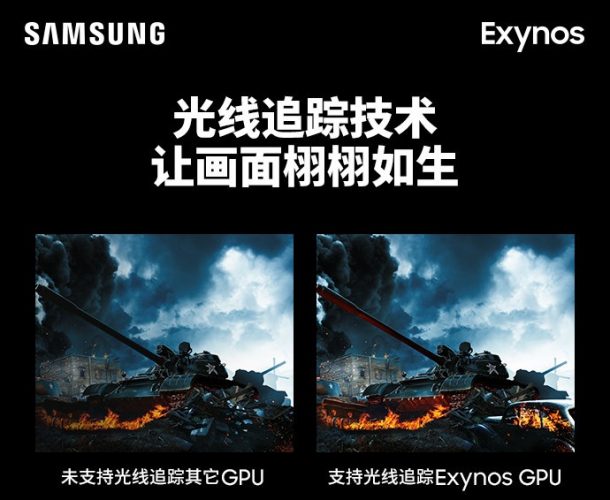 In a post on Chinese social media service Weibo (a few hours after the a leak from Ice Universe), Samsung explains that ray tracing involves “calculating the position of the light and the reflected area” for more realistic lighting effects when it comes to things like water, shadow, or shiny surfaces in games.

It’s a feature that’s become common in high-end desktop and laptop graphics cards in recent years, but Samsung’s new chips would be the first to support ray tracing for Android phones and tablets… assuming that’s the company’s intended market for the new Exynos processors. It’s also possible that Samsung plans to target Chromebooks or Windows on ARM PCs.

Samsung isn’t saying much about the actual specifications of its upcoming Exynos/RDNA processor, but the company shared an image showing… very little really. In a side-by-side comparison, one picture shows a tank rolling through a fire with a burning building in the background, while another image shows the same scene, but with light from the fire illuminating the bottom of the tank and sides of the building. For some reason Samsung also added a burning car to the second image, which is missing in the first.