The Samsung Chromebox line of mini-desktop computers feature Intel processors, small but speedy solid state disks, and Google’s Chrome operating system. Last year Samsung started selling a model with an Intel Celeron B840 processor, but now there’s a new kid on the block, and it features a faster Core i5 chip. 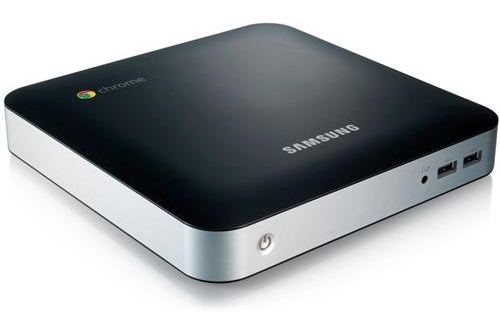 The new Samsung Chromebook XE300M22-A01US isn’t exactly a speed demon. It has a Core i5-2450M processor, which is a second-generation Intel Core CPU with HD Graphics 3000. In other word’s, it’s at least a generation behind Intel’s latest chips.

But it also happens to be the same chip used in the demo Chromebox units Google gave to developers at last year’s Google I/O conference.

The processor should be zippy enough to handle most basic computing tasks, including HD video playback. And that’s all you really need on a computer that’s designed to run web apps in a web browser rather than local, resource-intensive apps such as Office, Photoshop, or iTunes.

Like earlier Chromebox models, the new version features 4GB of RAM, 16GB of storage, 6 USB 2.0 ports, WiFi, Bluetooth, and Ethernet. There’s no VGA port, but there are DisplayPort and DVI jacks.

The best price I’ve found for the new model so far is at CompSource, which is charging $397. Amazon appears to be selling the same Chromebox for $423

Samsung also recently started showing off a new Chromebox case design, while the Samsung Chromebox with a Celeron processor and a more business-like black and gray case seems to be out of stock at most stores.

That suggests the company could position the model with the shiny white case as an entry-level system with a Celeron processor while selling the more business-like black and gray model with a faster Core i5 chip for a higher price.