We’ve known for a few months that second-generation laptop and desktop computers designed to run Google Chrome OS would use Intel Celeron chips instead of less powerful Atom processors. Now through a series of leaks we have more details.

TigerDirect appears to have accidentally sold at least one Celeron-powered Samsung Chromebox a few days early before removing the product listing. Now the folks at New Technik have uncovered a product page for a new Samsung “Edison” Chromebook at Newegg. 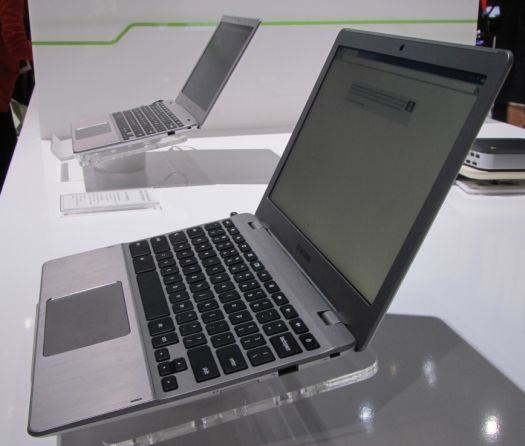 Newegg has removed the product listing for a product called the Samsung Edison XE550C22-H01US. But Google has a cached version of the webpage… although it will likely disappear soon as well.

The Samsung Edison Chromebook also has a webcam, 2 USB 2.0 ports, a headphone/mic combo jack and stereo 2W speakers. It has 802.11a/b/g/n WiFi, Gigabit Ethernet, and support for HSPA mobile broadband.

The Newegg listing shows a price of $549.99 for the Chromebook — but that appears to be for the 3G capable model. A WiFi-only version would likely be a little cheaper.