Samsung’s first smartphone with a foldable display is finally shipping after a multi-month delay. The company says it used that time to make the phone a little sturdier and harder to break… but for a smartphone with a $1980 price tag, it looks like the Samsung Galaxy Fold is still remarkably fragile — and Samsung knows it.

The company released a “Caring for your Galaxy Fold” video that advises you to use a “light touch” when interacting with the phone, and avoid adding a screen protector, since there’s already one built in.

And at the start of a durability test video from JerryRigEverything, you can see that the phone alerts users during setup that it’s not waterproof or dust resistant, and that you should “avoid pressing hard on the screen.”

So of course, JerryRigEverything did that and more to find out what it takes to break the Galaxy Fold. Long story short? Not much. 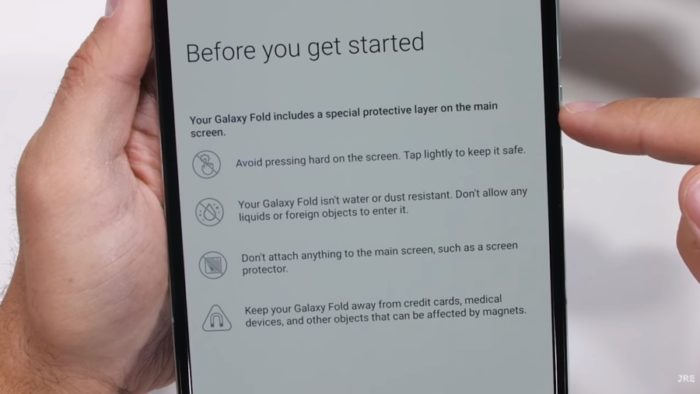 The good news is that if you use the phone exactly the way Samsung suggests, it seems to work as promised — offering a tablet-like experience when folded, and one-handed operation on a secondary, external display when folded.

It’s also nearly impossible to break the phone by trying to fold it the wrong way — the hinge appears to be very strong.

The bad news is that the phone is easy to scratch — you can do it with just a fingernail. And since Samsung advises against using a screen protector, there’s really no good way to prevent scratches other than being very careful.

JerryRigEverything also tested Samsung’s claim that the phone isn’t dust-resistant by pouring a bit of dirt on top of the phone, folding it, and then unfolding it. Sure enough, some dust got under the screen almost immediately.

Again — Samsung said not to do that. But what are the odds that your phone will never get exposed to a bit of dust or dirt while hanging out in your pocket or bag?

The rest of the durability test is a little more extensive (he starts attacking the phone with a razor blade and cigarette lighter), and might not be as indicative of real-world usage.

All of which is to say that the mechanical design of the hinge seems pretty good, but the display is still pretty fragile for such an expensive device.

Oh, and Samsung also notes that you’ll probably want to keep the Galaxy Fold away from credit cards or other items that can be affected by magnets, since the phone uses them to stay closed when folded.

On the bright side — at least the Samsung Galaxy Fold comes with the Google Play Store, unlike some other pricey Android phones.

via SamMobile and 9to5Google