Most high-end smartphones have an ambient light sensor that can be used to determine how bright your phone’s display should be. If you’re in a dimly lit environment, the screen doesn’t need to be very bright to be visible. But if you’re outdoors on a sunny day, the screen brightness should probably be cranked way up in order for you to see it.

Some budget phones, on the other hand, don’t have ambient light sensors… so they haven’t typically supported automatic brightness settings… until now.

Samsung is rolling out a software update for the Galaxy J8 smartphone that adds support for auto brightness… by using the front-facing camera to snap a picture every time you turn on the screen. 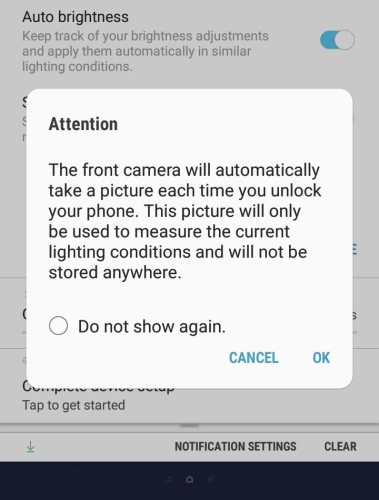 The phone doesn’t save those selfies. Instead it just uses them to get a look at the lighting conditions and uses that information to figure out how bright the screen should be.

The solution may be cheaper than adding a sensor to the phone (especially once it’s already been manufactured, shipped, and sold to the customer). But it’s also not quite as effective. Moving from one environment to another while the screen remains on won’t cause any changes in screen brightness, for example.

Still, it’s an interesting software-based solution to what would ordinarily seem like a hardware-based problem.