The Samsung ATIV Book 9 Lite is a reasonably thin and light laptop that sells for a much lower price than the company’s high-end ATIV Book 9 Plus. Unfortunately the original ATIV Book 9 Lite was also overpriced for a laptop with a relatively slow AMD processor that could hardly even compete with an Intel Atom chip.

Now Samsung is giving the ATIV Book 9 Lite a bit of a makeover, and this time the company’s using a faster Intel Core i3-4020Y Haswell processor.

Update: An AMD rep reached out to Liliputing to make it clear that Samsung will continue to offer the AMD model as well as the new Intel Core i3 model. 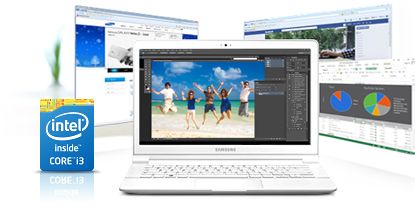 The new laptop still lacks some of the premium touches found on higher-end ultrabooks. It has a 13.3 inch, 1366 x 768 pixel touchscreen display, for instance, rather than a higher-resolution screen. The laptop doesn’t have a backlit keyboard.

Samsung claims the notebook will run for up to 8.5 hours, but that seems a bit optimistic for a laptop with a 30Whr battery — even one with an energy efficient Haswell CPU.

Samsung isn’t yet selling the new ATIV Book 9 Lite in the United States, but a handful or European stores are already selling it for around 700 Euros, which makes it a bit more expensive than the AMD version.

The laptop also showed up recently at Samsung’s Korean website.