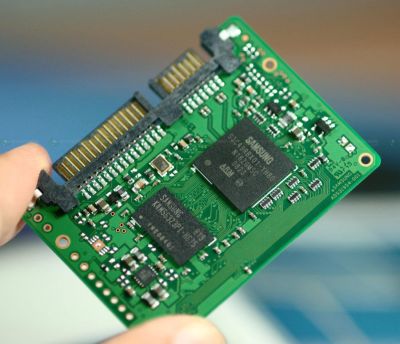 One of the goals of early low cost ultraportable laptop makers (like the OLPC Project and Asus) was to make computers that are both cheap and durable. The cheap side was pretty easy. By using older components like an Intel Celeron chip, Asus was able to keep the price of the original Eee PC fairly low. Newer models use the Intel Atom chip which is specifically designed to be both low cost and low power.

But durability comes at a cost. Many laptop makers have decided to use solid state disks in lieu of traditional hard drives. SSDs have no moving parts and are therefore less likely to break if you bump or drop your computer. But solid state disks are pricy, and so Asus, HP, Acer, and other companies that have offered liliputers with SSDs have typically used low capacity disks with just 2GB/4GB/8GB/16GB/20GB or at most 40GB of storage. And despite the fact that some solid state disks offer serious a performance boost over hard drives, many of these cheaper disks do not.

Now it looks like Samsung is targeting the low cost PC market with a new SSD designed to offer decent performance at a low price. According to a press release, Samsung officials say the company has refined its manufacturing techniques to make it easier to produce the new disks at a lower cost.

The low desnsity chip uses an SATA II controller and is capable of read speeds up to 90MB/s and write speeds of between 25MB/s and 70MB/s depending on which model you get. The chips will be available in 8GB, 16G, and 32GB capacities. These disks are most likely designed for computer makers to preinstall in systems rather than for direct sale to consumers. But if you want to upgrade your existing HDD or SSD, I’m guessing chips will wind up on eBay at some point in the not too distant future.