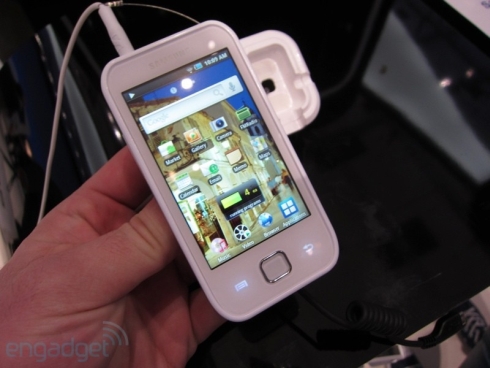 While Apple’s brand new iPod touch has specs that are pretty hard to beat (960 x 640 pixel display, 2 cameras, HD video recording, and so forth), it looks like Apple’s little device is starting to get some serious competition. While the iPod line started out as portable media devices, they’ve transformed into portable computing devices for surfing the web, playing games, running all sorts of apps, and oh yeah, watching videos and listening to music.

This week Archos launched a new line of Android-powered devices, including 3 handheld media players which undercut the iPod touch on price, ranging from $99 to $199. The Archos 28, Archos 32, and Archos 43 can also handle a range of media formats not supported by Apple iDevices, including WMV, DivX, Xvid, and MKV.

Now Samsung has rolled out a new line of portable media players, including the Samsung Galaxy Player 50 which runs Google Android 2.1. The Galaxy Player 50 has a 3.2 inch display and can handle DivX, H.264 and other media formats.

Engadget got a chance to check out the Samsung Galaxy Player 50, and report that it has a multitouch display, and comes with either 8Gb or 16GB of storage space and supports 802.11b/g/n WiFi. It also has a 2MP camera. The thing that surprised me the most was that the demo unit appeared to have the Android Market and other Google apps including Google Maps Navigation and Gmail.

Those features are usually reserved for smartphones, and it’s not entirely clear what kind of deal Samsung must have struck to get them on the Galaxy Player 50. The Archos tablets, for instance, use the third party AppsLib market, which has about 5,000 apps available for download instead of the close to 100,000 apps available from the full Android Market.

On the other hand, it’s always possible that the finished product won’t actually ship with access to the Android Market… but Samsung isn’t the kind of company that usually teases us with features that will later be removed.

It’s not entirely clear whether the Samsung Galaxy 50 is the same portable Android device we’ve been hearing about for the past few weeks. On the one hand, the button layout certainly makes it look a lot like the Samsung YP-MB2. On the other hand, the YP-MB2 appeared to have a black surface and chromed edges while the Galaxy 50 appears to have a white plastic case. So I can’t say for certain whether Samsung is working on another Android media player or if the Galaxy 50 is simply the new name for the product-formerly-known-as the Samsung YP-MB2.