Amazon’s latest Kindle Fire tablets including the Kindle Fire 2 and Kindle Fire HD 7 and 8.9 inch tablets have locked bootloaders. That probably doesn’t matter much if you plan to just run the operating system that came with your tablet. But it causes a bit of a headache for folks that want to load custom firmware.

Developer Hashcode has been working on a tool called Safestrap which lets you get around the locked bootloader so that you can load custom ROMs, custom recovery, or other software. Recently Hashcode released a public beta of Safestrap for the Kindle Fire HD 7 inch tablet.

Update: Safestrap development has been put on hold because a different method for sidestepping the locked bootloader has been discovered. 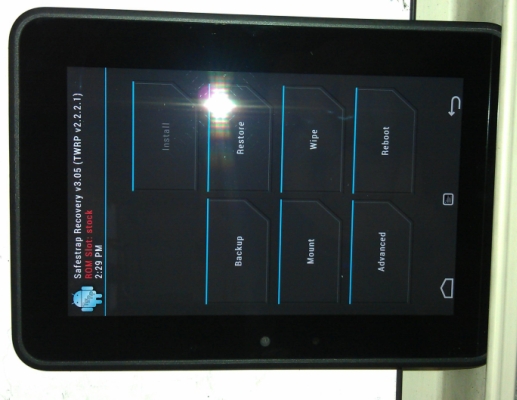 Safestrap basically divides up the tablet’s storage into separate areas — and then lets you decide which one you want to boot from. So once everything is configured properly you can choose to boot Amazon’s custom version of Android 4.0 or to boot into alternate software such as CyanogenMod or ClockworkMod or TWRP recovery.

Right now there aren’t any custom ROMs such as CyanogenMod, AOKP, or MIUI available for the Kindle Fire HD. But you can use SafeStrap to install a custom recovery utility such as TWRP.

That will let you make a complete backup of your device, or restore from that backup. This is always a smart thing to do before making any other serious changes to an Android device.

Eventually, once custom ROM builders start creating alternatives to Amazon’s operating system for the Kindle Fire HD, you’ll be able to use SafeStrap and TWRP to install them.

At this point, Safestrap is still in beta testing. There are some known kinks to work out, and you run the risk of messing up your tablet if you start experimenting with the tool. In other words, if you want to help test the product and are willing to deal with the consequences, go ahead and download it. If you’re looking for a way to turn your $199 Amazon tablet into a general-purpose Android tablet, you’re going to have to wait a while longer.