The One Mix Yoga 3 is a small laptop that features an 8.4 inch touchscreen display and a convertible tablet-style design. It sells for about $760 and ships with Windows 10, but one of the first things I tried doing with the tablet was to boot a GNU/Linux distribution.

I posted some notes about what happened when I took Ubuntu 19.04 for a spin on the One Mix 3 Yoga in my first-look article, but plenty of folks who watched my first look video on YouTube asked for a video… so I made one of those too.

In a nutshell, it’s fairly easy to boot an alternate operating system on this little laptop. Just plug in a bootable flash drive or USB disc drive, hit the Del key during boot to get into the BIOS/UEFI menu, and change the boot priority order so that the computer will boot from a USB device.

One complicating factor is that the UEFI settings screen is displayed in portrait mode rather than landscape. So I wasn’t exactly surprised when the display orientation was incorrect when Ubuntu first launched… except it wasn’t sideways, it was upside down.

I opened a terminal window, typed “xrandr -o left” without the quotation marks, and everything flipped around, making the laptop a lot more usable.

WiFi, audio, and video playback all seem to work without any problems. But the touchscreen and digital pen aren’t supported out of the box. It’s possible that there may be software tweaks that can fix those issues, but I didn’t spent a lot of time investigating possible solutions. 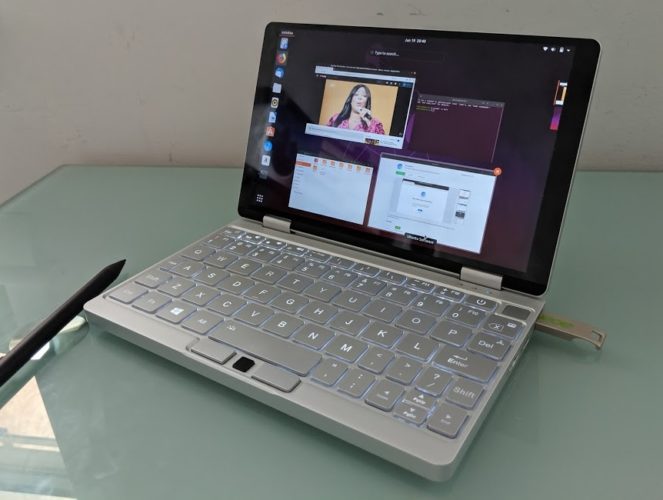 Rotating the computer also does cause the screen orientation to change… first it goes black for a few seconds, and then it reappears in another orientation.

Fun fact: tilting 90 degrees left will result in the screen rotating to the proper portrait orientation. The same thing happens if you tilt 90 degrees to the right. But if you switch back to landscape… the screen will be upside down again and you’ll probably have to run the xrandr -o left command again. 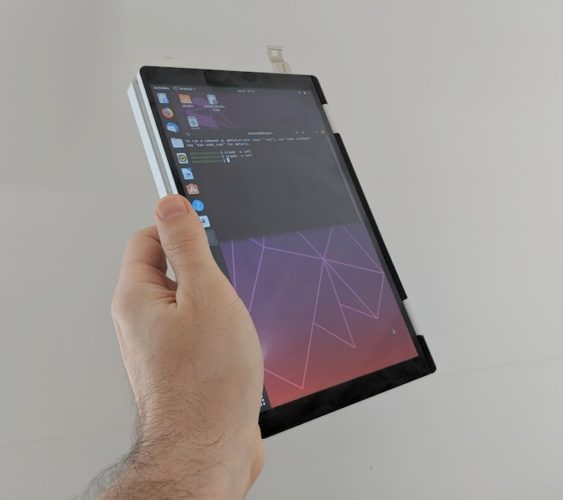 Anyway, long story short: you can run Ubuntu 19.04 out of the box without too much difficulty if you’re primarily planning to use the One Mix 3 Yoga as a tiny laptop. If you want to use it as a tablet, it’s more of a read-only device… at least for now.

The One Mix 3 Yoga is available from GeekBuying for $760 and up, but you can save $10 when you use the coupon code: BELWFNVY.

Based on a suggestion from @FXBOY4EVA, I took Ubuntu 18.04 LTS for a spin. While it doesn’t have all the updates included in the newer Ubuntu 19.04, this is a long term support release that’s designed to be more stable… and point releases (the .2 in the name) sometimes bring better hardware support.

That explains why Ubuntu 18.04 LTS was the only operating system I’ve tried so far that recognizes both the touchscreen and the active pen out of the box.

When I first booted into Ubuntu, the display scaling was set to 200 percent, but the screen was upside down. I was able to flip the screen by typing xrandr -o left into the terminal. And almost everything else seemed to work, including WiFi, audio, video, keyboard shortcuts, and even the touchscreen.

I could also hover the pen over the display and watch an on-screen cursor move… in the wrong direction. When I dragged the pen left and right, the cursor went up and down. But at least it recognized the pen!

Flipping the computer sideways made the screen go black for a moment, then come to life in portrait mode. The pen even worked properly in portrait mode (albeit with a bit of lag).

Things got weird when I tried flipping the screen back to landscape mode though. Not only was the display upside down again, but I couldn’t get the keyboard to work at all, which made it impossible to type the command to rotate the screen again.

All of which is to say, Ubuntu 18.04.2 LTS doesn’t seem to work perfectly out of the box… but it provides the best experience of any GNU/Linux distribution I’ve tried on the One Mix 3 Yoga so far. Advanced users may be able to find solutions to the pen and display rotation issues I encountered, and it’s possible that some things would be easier to fix if I had installed the operating system rather than run from a flash drive.

FYI, I also tried Ubuntu 18.04.2 LTS on the GPD P2 Max mini laptop. The touchscreen didn’t work, but everything else did. That’s pretty much what happened when I used Ubuntu 19.04.

The touchscreen worked… but there were some serious out-of-the-box display issues. First, the resolution was stuck at 800 x 600. And second, the orientation was stuck at portrait. Advanced users may be able to find ways to resolve these issues, but the Display Settings menu and the good old “xrandr -o left” commands were no help.

This is a version of Ubuntu MATE that’s been optimized to run little computers with similar hardware, but it hasn’t yet been updated to support newer devices like the upcoming GPD P2 Max or the One Mix 3 Yoga.

When I tried it on this computer, the touchscreen didn’t work, pen input didn’t work, and the display orientation was sideways out of the box — but I was able to rotate the screen manually using the Display Settings.

Audio and video worked out of the box, and the display scaling was correctly set to somewhere in the 200 percent range.

Chromium OS for the GPD Pocket 2

Like the above operating system, this is an OS that’s been designed for a specific set of small computers with similar low-power processors, but it hasn’t yet been updated to specifically support the One Mix 3 Yoga.

I was pleasantly surprised to note that almost everything works out of the box — including the touchscreen, keyboard shortcuts for volume and brightness, and display scaling.

One quirk is that the screen orientation was set to portrait mode out on first boot, but I was able to rotate the user interface from the display settings.

11 replies on “Running Ubuntu on the One Mix Yoga 3 mini laptop (Update: and other operating systems)”