The GPD Pocket 3 is a tiny laptop computer with an 8 inch touchscreen display, a swivel-hinge that allows you to fold the screen over the keyboard for use in tablet mode, and a modular port system that allows you to customize the little computer’s capabilities.

Up for pre-order for $650 and up during an Indiegogo crowdfunding campaign, the Pocket 3 is scheduled to begin shipping to backers in January. And while the units delivered to customers will run Windows software out of the box, the Pocket 3 is a fairly Linux-friendly computer. I recently did some quick testing of Ubuntu 21.10 and Fedora 35 and found that most things worked pretty well… after a few small tweaks. 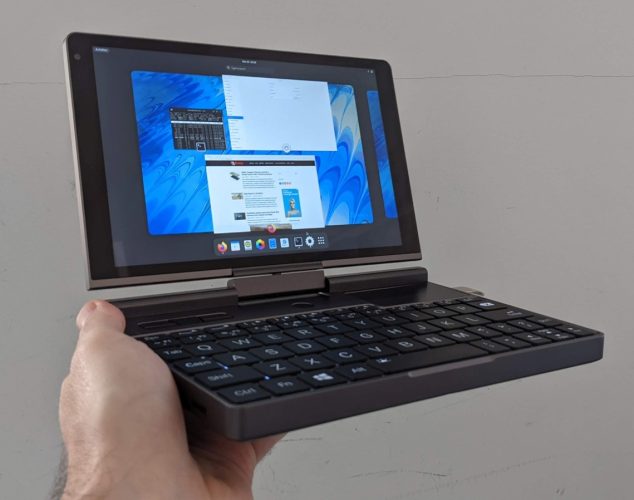 Testing a Linux distribution is pretty simple. Just prepare a bootable USB flash drive with the operating system of your choice, plug it into one of the computer’s USB ports, and reboot the system – then press the Del key during startup to get to the BIOS/UEFI setting screen.

From there you can navigate to the Save & Exit screen, choose your boot device, and then hit enter.

First I tried Fedora 35. The operating system booted quickly, but the screen was set to portrait orientation by default, which means that everything was displayed sideways. 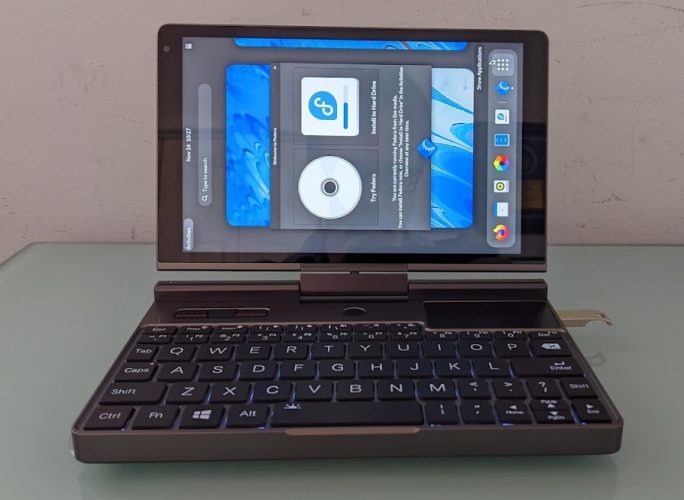 This was easy to fix – I just hit the Windows/Super key, type “display” and hit enter to open the Display settings. Then I was able to choose “portrait left” for the display orientation. Once you get used to the idea that the computer things portrait is landscape, and vice versa, everything else falls into place. 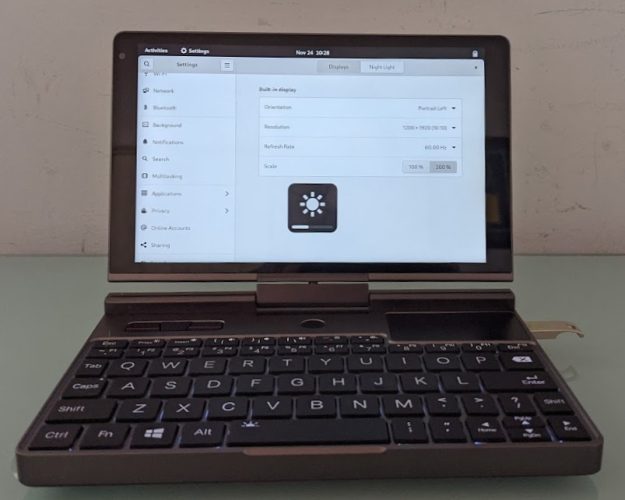 I had no trouble connecting to WiFi, opening a web browser, and doing a little surfing. The touchpad, keyboard, keyboard shortcuts, and touchscreen display were all detected. And so was the digital pen that GPD supplied with the Pocket 3. It supports hovering, tapping, and palm rejection.

Since the demo unit GPD sent me for testing is a pre-release prototype that doesn’t have the hardware necessary for automatic screen rotation, I cannot say whether that works. But I appreciated that when I rotated the screen manually using the Display Settings dialog, not only did the image rotate, but so did the finger and pen touch input detection. I’ve had problems with some other devices in the past where rotating the display orientation would have no impact on the touch input, which meant that you’d touch one part of the screen and affect a different area entirely. 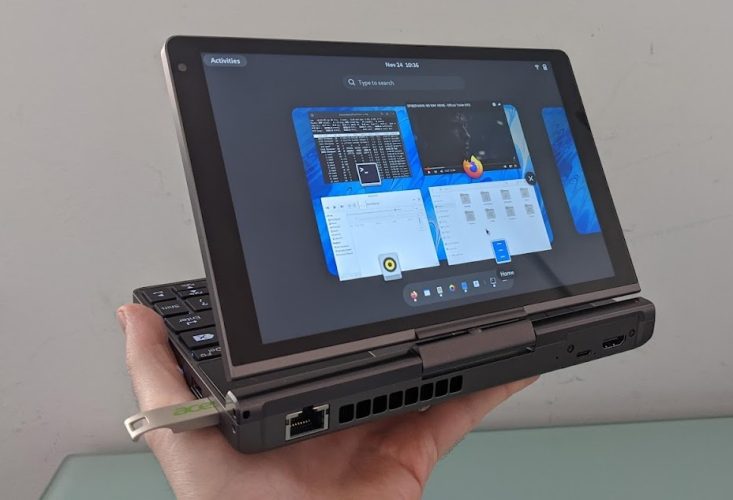 There was one key feature that wasn’t working out of the box with Fedora – audio. I couldn’t hear any sound at all, whether I was trying to stream video from YouTube in Firefox or attempting to play an MP3 file in Rhythmbox, because the operating system simply didn’t detect the audio device.

I also found the Cheese camera app to be wonky. While I could use it to snap photos, the video preview window was choppy, and recording video was pretty much a non-starter. And rotating the display does not seem to rotate the camera orientation – so holding the computer in portrait orientation with the camera app running results in a preview that looks sideways. 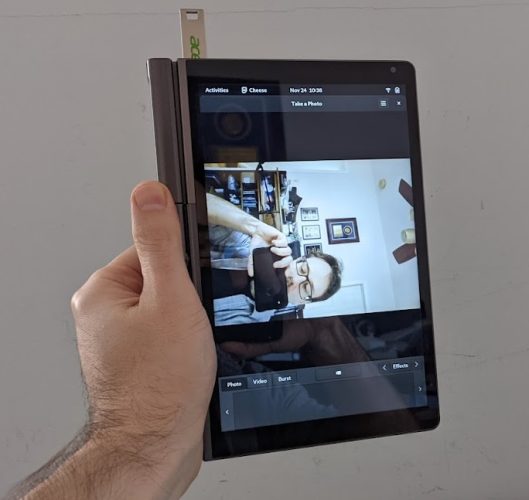 Next, I tried out Ubuntu 21.10 on the Pocket 3. For the most part, the results were similar here. WiFi, video, keyboard, touchpad, touchscreen, and pen input all work out of the box, but audio does not. And the screen was set to portrait orientation by default and I was able to switch it to landscape by opening the Display Settings and choosing “portrait left.” 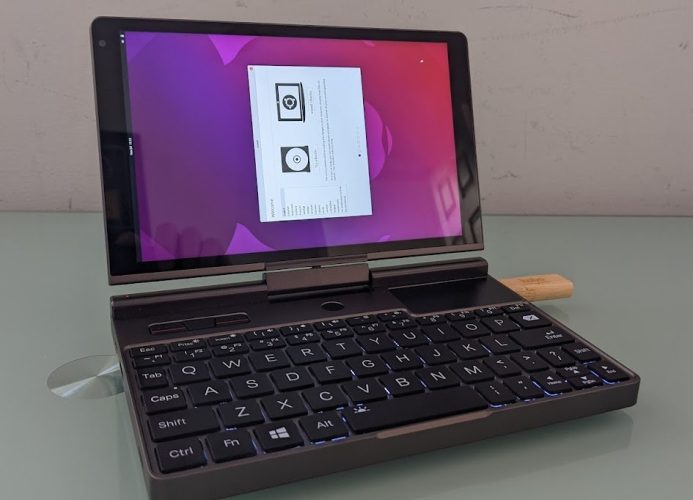 One difference is that the display scaling was set to 200% by default in Fedora, which makes sense for a device like the GPD Pocket 3 with a pixel-dense 8 inch, 1920 x 1200 pixel screen. But it was set to 100% scaling by default in Ubuntu, which made text and graphics look pretty tiny.

Since Ubuntu supports fractional scaling out of the box though, I was able to switch to 150%, which I find provides a nice balance between cramming as much as possible onto the display while also providing a comfortable viewing experience that doesn’t require a magnifying glass. 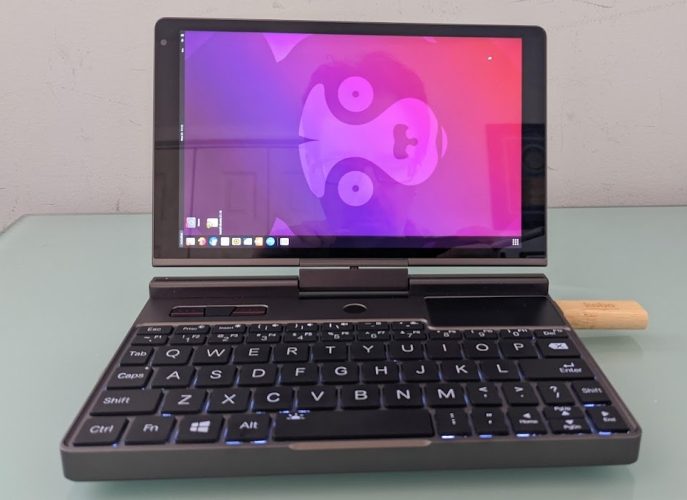 Also, because of the way Ubuntu’s LiveUSB image is set up, I found it a little easier to troubleshoot the audio issue with Ubuntu. Following advice from The Phawx, who is also testing a pre-release Pocket 3, I took the following steps:

If you’ve installed Ubuntu or another Linux distribution to your device’s local storage, then the next step would probably be to reboot. Since I was running from a USB stick and would lose all my settings if I rebooted, I typed these commands into the terminal window next instead:

After restarting the audio service, Ubuntu was able to detect the Pocket 3’s sound card and I was able to hear audio from YouTube videos. There were some glitches in the audio, but I suspect that a reboot would probably help. 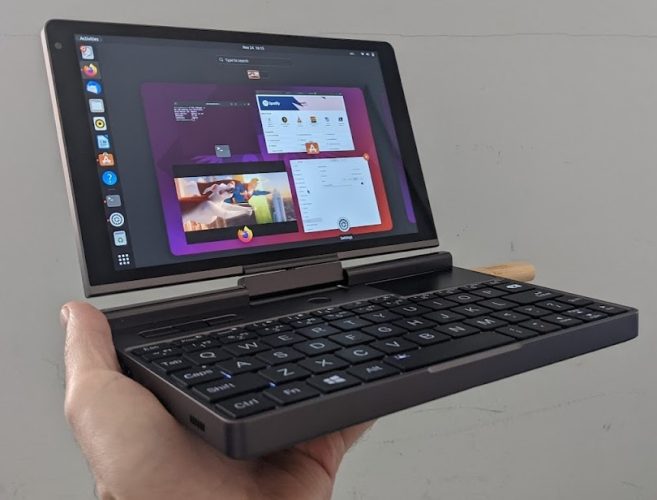 The demo unit I’m testing features an Intel Core i7-1195G7 processor, 16GB of RAM, and 1TB of storage, and sells for $999 and up during crowdfunding. But GPD also offers a lower-spec model with an Intel Pentium Silver N6000 processor, 8GB of RAM and 512GB of storage for $650 and up. Unfortunately since I haven’t had a chance to test that version, I cannot say if it’s as Linux-friendly as the Core i7 model.

Here’s a run-down of the specs for both devices:

One more thing to keep in mind before backing the GPD Pocket 3 crowdfunding campaign is that GPD is a small Chinese company that ships its products to customers worldwide, but which also offers limited support and customer service for its products.

The company has also made some mistakes in the past, like  shipping hardware with the wrong components. So I’d only really recommend buying GPD gear if you’re tech savvy enough to troubleshoot any hardware and software problems that may arise on your own… and also if you’re potentially willing to eat the cost if anything goes wrong and you’re unable to get your device repaired or have a refund issued.