Less than a month after Google Reader shut down, one of the most popular replacements is also effectively shutting down. The folks behind The Old Reader, which basically clones the look and feel of Google Reader’s user interface from a few years ago picked up hundreds of thousands of new users after Google announced plans to eliminate its online RSS reader.

The Old Reader has buckled under the strain… as have its developers. So they’ve decided that they’d rather serve a few thousand users very well than a few hundred thousand poorly. And they’re taking the site private.

Update: A new management team has taken over The Old Reader and plans to keep it open, migrate to a new server facility, and improve performance. 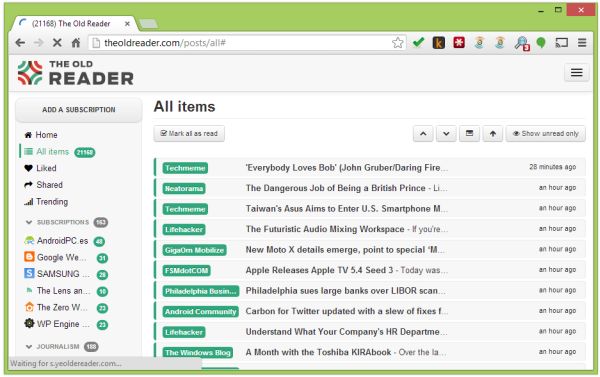 What that means is that most of the new users will be booted off the service in a few weeks. You’ll be migrated to the new private site if you fall into one of these categories:

There are a handful of other options for people looking for a Google Reader-like service. Feedly, NewsBlur, AOL Reader, and Digg Reader are a few cloud-based solutions that let you access your feeds on nearly any device. There are also plenty of desktop RSS readers, self-hosted readers that you can run on your own service, or mobile apps.

But I know The Old Reader had a bit of a cult following, and this is bad news for folks who only discovered the service after Google unveiled its intention to kill off Reader.

While the development team isn’t particularly interested in charging for access or raising venture capital, the team is open to the idea of selling the service to interested parties that have a serious plan that would let The Old Reader scale to the type of traffic it’s getting these days, or more.

One reply on “Running a Google Reader replacement is hard: The Old Reader goes private”