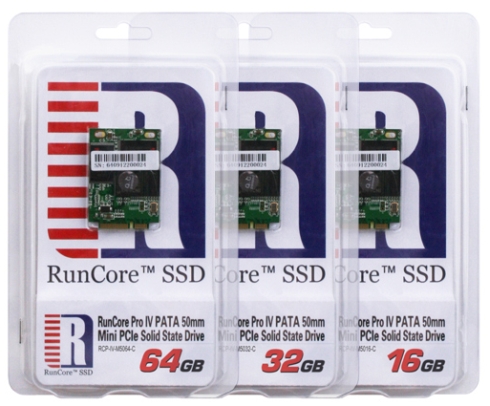 Solid State Disk maker RunCore has released a new line of 50mm mini-SATA PCIe SSDs for the Asus Eee PC T91 and Dell Inspiron Mini 9 netbooks. Both versions are part of the RunCore Pro IV Light line and are designed for netbooks with mini PCIe slots rather than hard drives.

In a nutshell, these SSDs offer faster read and write speeds than you’ll get from the disks that come with those netbooks. RunCore offers 16GB, 32GB, and 64GB versions of the Pro IV Light SSDs.

The SSDs designed for the Dell Inspiron Mini 9 will also work with the Dell Vostro A90 netbook, which is virtually identical in most respects. These SSDs feature read speeds up to 90MB/s and write speeds up to 55MB/s. The list price for these SSDs are $110 through $250, although MyDigitalDiscount sells them for $90 through $230.