Google has begun bringing Android apps to the Chrome Web Store, allowing you to run a handful of Android apps on a Chromebook or Chromebox. But as we’ve reported, it’s already possible to run some Android apps that aren’t available in the Chrome web store… it just takes a little work to prepare and load those apps. 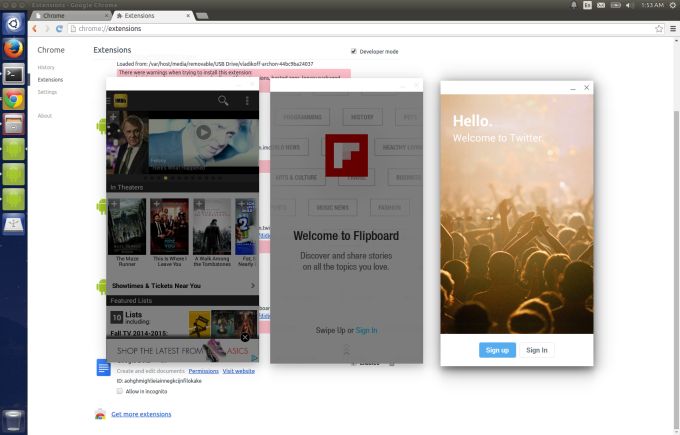 The ARChon custom runtime is a modified version of Google’s Android Runtime for Chrome. It allows you to run multiple side-loaded Android apps at once… and in addition to working on Chrome OS devices it works on Windows, OS X, and Linux computers running the Google Chrome 37 or later web browser.

You still need to prepare Android apps manually before you can load them, and the modified runtime may be unstable when used on a system that’s not running Chrome OS. But it provides a way to run Android apps as if they were native apps on a Windows, OS X, or Linux computer without installing an emulator or virtual machine.

Not every Android app will work with the ChromeOS-APK side-loading method. Most paid apps won’t run properly and some other apps crash if they rely on frameworks or other components that aren’t available. But you can find many apps that do work (and APK files for many free apps which have already been prepared to run on Chrome) at the new ChromeAPKs subreddit. Note that it’s probably a good idea to prepare your own APK files though… installing apps from random links posted on the internet isn’t always a good idea.

6 replies on “Run Android apps in Windows, OS X, Linux with Chrome (and a modified runtime)”