Google may sell a line of phones and tablets under the Nexus brand, but the company doesn’t build these devices itself. Google has partnered with companies including HTC, Asus, Samsung, and LG to build every Nexus model so far.

Right now the company’s latest smartphone, 7 inch, and 10 inch tablets are built by LG, Asus, and Samsung, respectively. But rumor has it that the lineup could look more like Motorola, Asus, and Asus soon. 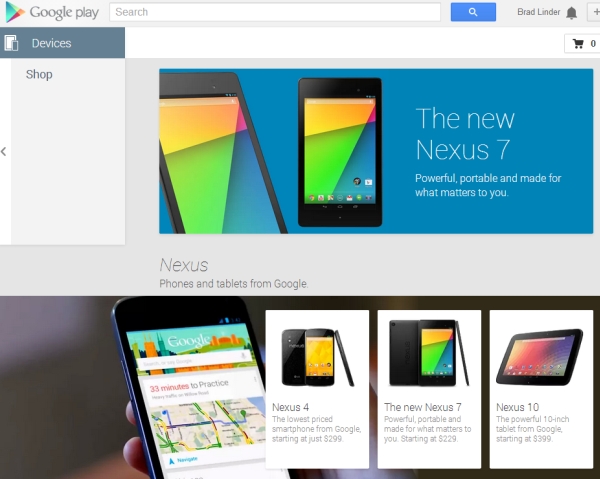 Google’s latest 7 inch tablet is built by Asus, as was last year’s model. But the 10 inch Nexus 10 tablet introduced in 2012 was built by Samsung.

It’s an impressive device with a 2560 x 1600 pixel display and it was one of the first products to ship with a Samsung Exynos 5250 ARM Cortex-A15 dual core processor.

But Geek.com’s Russell Holly reports that Google has chosen Asus to build its next 10 inch tablet. It’s expected to launch in time for the 2013 holiday season.

There’s not much else we know about the new tablet yet, but it’ll likely ship with Android 4.3 Jelly Bean, have a screen at least as good as last year’s model, and possibly a faster processor such as a Qualcomm Snapdragon 800 chip.

Geek.com has received multiple tips from sources at Google, as well as an inventory screen from a retail store showing an Asus  Nexus 10 with 16GB of storage. Most of the details on that screen are reportedly just filler, which is why the in stock date, dimensions, and other information make no sense. 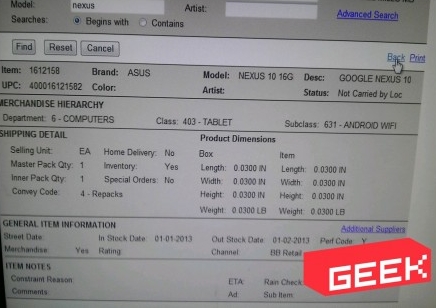 If you’d heard a few weeks ago that Samsung might be working on a new Nexus 10 tablet, it turns out that came from a Tweet taken out of context — nobody has officially said who would make Google’s new 10 inch tablet.

Google’s also due to release a new Nexus smartphone this year. Some folks figure it’ll be called the Nexus 4, just like last year’s model — because the number is related to the screen size, not the number of devices that have come before.

Or maybe it’ll have a different name altogether. After all, the lineup hasn’t exactly had consistent names: Google Nexus One, Samsung Nexus S, Samsung Galaxy Nexus, and Google Nexus 4.

Anyway, theoretically Google can work with any handset maker on a Nexus phone which serves as a developer device with the latest software straight from Google and reasonably low prices.

But Google also has a kind of chummy relationship with one phone maker these days: It bought Motorola for $12.5 billion a little while back, and while Motorola continues to operate as an independent company, you may have noticed that its latest phones seem to ship with a pretty much stock Android software experience.

Now mobile tech blogger Taylor Wimberly (who previously leaked a lot of correct details about the recently announced Moto X smartphone) says Motorola will release a Nexus smartphone in the fourth quarter of 2013.

The phone will reportedly be different from the Moto X.

It’s interesting to note that Wimberly doesn’t say Motorola will release the only Nexus smartphone this year. Google has recently started offering a range of phones through the Play Store, including Google Edition versions of the Samsung Galaxy S4 and HTC One. It’s not inconceivable that we could see multiple Nexus devices at some point.

But the odds of at least one future Nexus phone coming from Motorola are starting to look a little stronger.

4 replies on “Rumors: Next Nexus 10 built by Asus, New Nexus phone from Motorola”