There’s mounting evidence that Google will unveil a new Nexus 7 tablet on July 24th. Android and Chrome boss Sundar Pichai is hosting a press event on that date, and while it’s possible he wants to talk about Android 4.3, new Chromebooks, or something else, there are a few other clues suggesting a new Nexus 7 will be at least one of the topics up for discussion.

Update: Android Central has photos, a brief video, and even some possible specs for what looks like a new Nexus 7 prototype.

Update 2: The new tablet may have wireless charging and 1080p video output. 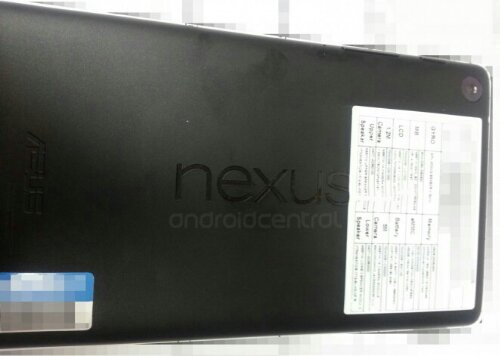 First up, a tipster sent the folks at Android Central a photo showing an inventory screen for a retail store that includes several models of “Nexus 2” tablets

That would make the new tablets a little more expensive than the first-generation Nexus 7. But the new models are also expected to have faster processors, front and rear cameras, and maybe even a higher resolution display.

Trying to compete with Amazon, Hisense, and other budget tablet makers on price is probably a losing battle these days. So it makes sense for Google to offer a powerful, affordable 7 inch tablet without trying to make it the cheapest model around.

Meanwhile, Engadget received a few shots of documents from OfficeMax discussing a “new Google Nexus 7” which is built by Asus and which will have 32GB of storage and sell for $269.99. The tablet’s expected to arrive at stores on July 20th, but that doesn’t mean they’ll be put on store shelves right away.

It would make sense for retailers to wait for Google to make an official announcement on July 24th… although it’s always possible that Google could introduce the tablets before that event on Wednesday.

A series of Asus-built tablets which may or may not be new Nexus devices have also been showing up at the FCC in recent months.

At this point Google hasn’t even confirmed that there is a second-generation Nexus 7, so it’s possible that this is all part of some elaborate hoax. But hopefully we don’t have to wait long to find out for certain.